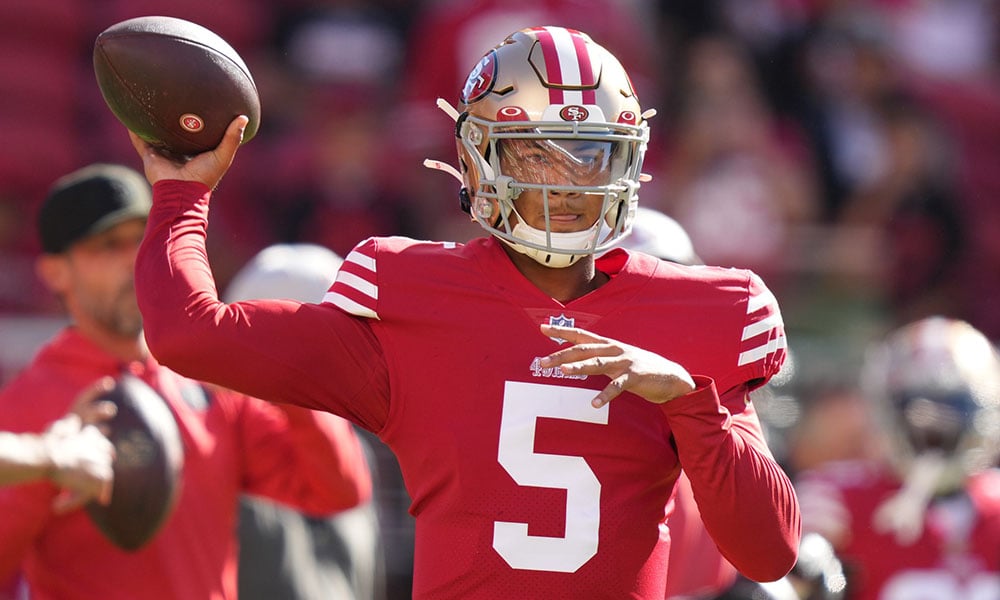 We break down the unfortunate injury to Trey Lance.

In a sad and ironic twist of fate, the San Francisco 49ers failed to find a trade partner for Jimmy Garoppolo all off-season, hoping to find a team that lost its starter and needed him before the season started. In the end, they kept him and ended up being the team that needed him all along after losing starter Trey Lance to a season-ending ankle injury this week. The injury is a significant one in dynasty leagues and is going to change the future values for a number of players. Let’s take a look at the players whose values have changed as a result of this unfortunate turn of events.

Football can be a cruel sport and Lance is going to be facing a lengthy recovery from his broken right ankle. On the plus side, he reportedly avoided a compound fracture and while he’s still out for the year, things could be worse. The problem right now is the fact Lance just hasn’t played very much football. He played just one game at North Dakota State in 2020, then was used more as a gadget player last season, completing 41-of-71 passes for 603 yards, five touchdowns and two interceptions, adding 168 rushing yards and another touchdown on the ground. In his two starts this season, Lance completed just 15-of-31 passes for 194 yards with no touchdowns and an interception, adding 67 rushing yards in the process. In short, that’s not very much football over the past three years and we won’t see him again until 2023.

Lance was supposed to provide a dual-threat option for San Francisco that could put them over the top. His ceiling in fantasy football looks to be enormous, but there’s a very low floor here as well – this injury just clouds that further. Based mostly on his potential alone, Lance had moved all the way up to QB10 in our rankings as he could potentially be a more explosive and accurate version of Jalen Hurts. Instead, we’re now going to need to wait another year before seeing just where Lance fits within that floor and ceiling spectrum. His ADP is going to drop as a result. The big winner here in both fantasy and reality is Garoppolo. Beyond the obvious pay increase (he’ll earn up to $350,000 per game this year), he’ll have a chance to prove to another team that he can still be a very effective starter in the league. All in all, he’s been just that during his career as he’s completed right around 68% of his passes for 12,006 yards, 72 touchdowns and 38 interceptions over parts of nine seasons. While clearly not the runner Lance is (he has just 197 career rushing yards), he’s more than capable as a pocket passer. Unfortunately, that doesn’t translate well in fantasy football. Garoppolo is likely to have his moments going forward, but he’ll be more of a safe QB2 or bye week filler than a difference maker in dynasty leagues. Still, he needs to be back on dynasty rosters immediately. The 49ers wanted to be more of a read-option running team this year, but they’ll revert back to their zone scheme fully now that Lance is out for the year. The challenge with this unit is always going to be the unpredictability of Kyle Shanahan in terms of their usage. With Elijah Mitchell on the shelf, Jeff Wilson (18 carries) and Tyrion Davis-Price (14 carries) led the way this week, though Davis-Price did receive most of his carries in garbage time. Regardless, the 49ers will be very reliant on their running game and play action passes, so anyone who starts a game for the 49ers will be a worthy starter in dynasty leagues during that given week. This is one of the rare instances where a starting quarterback can be lost for the season and have it actually help the receiving corps in fantasy. Fact is, Garoppolo is a more than capable pocket passer and at this point, more accurate than Lance is. While Lance offers the salivating upside, his skill set just hasn’t been developed enough to make a huge difference with the receivers. With Garoppolo in tow, there should be no noticeable drop-off from the production of Deebo Samuel, Brandon Aiyuk, Jauan Jennings, or George Kittle. If you have a dynasty manager in your league who somehow thinks any of these players is going to tank now, it would be a great time to send some trade offers. What kind of trade value for Jimmy G in a Superflex