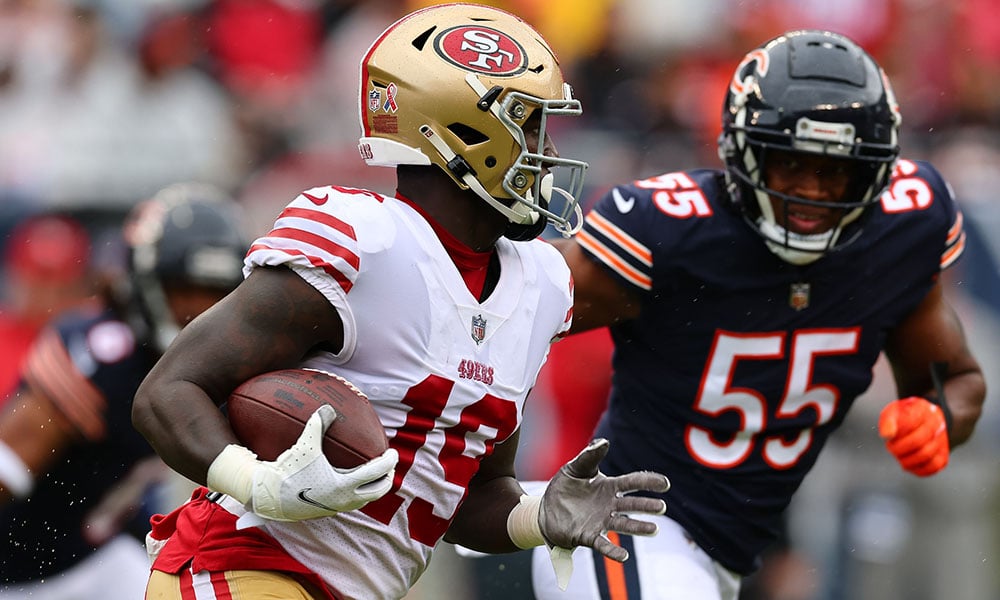 We evaluate all the target share data from week one and what it means moving forward.

Welcome to our Target Share series, where we are going to try and use receiving data to know the top players before it’s common knowledge. That’s not the only goal, but it’s a good place to start.

Throughout the season, I’ll collect the weekly data and post it on a sheet.

Here is a look at the top-scoring receivers from week one. High-scoring wide receivers establish relatively large roles earlier than you think and the points flow from that volume. Since 2018, 75-80% of the top 12 receivers are already averaging more than 20% target share. Slightly fewer average over 15 points per game (PPG) by week one. The missing few are often due to injury or later season breakouts like Hunter Renfrow in 2021.

That doesn’t mean we should ignore the few who slip the net, but 100% are over that mark by week four. For an example of the top performing players from week one of 2021, the only players not to finish inside the top 12 by the end of the season had less than a 20% share of the team’s expected points.

The quicker we react, accurately, the better. The difficulty is there are 51 players from week one who broke the 20% target share threshold.

Let’s highlight some concerns above the fold.

I wouldn’t be concerned with Pittman but he’s worth noting. He had a great game one to follow up his breakout last year and should be a locked-in starter this year.

However, our view from the start of the season suggests he may not finish in the top 12. He had a 17% expected points share and was the 15th-most efficient receiver this week.

If you can extract value for Duvernay this week, I’d consider it. While something for nothing is great, Duvernay was a strong part of a lower passing offense and produced on pure efficiency with 14.7 points over what an average play would produce.

It is nice to get a reminder that UDFAs matter in week one of 2022, and I think his demise was unduly declared by dynasty ADP.

However, based on the workload in week one, I’d expect DJ Moore to be back on top of the production chart quickly, leaving Anderson once more as flex-worthy only. While he was the target share leader with 29% versus Moore’s 22%, this screams matchup and game script to me.

This off-season his production suggested he was a 14-16% target share player with strong weekly upside. Week one showed both but the upside showing early may help secure some extra value. He’s a good player on a good offense, but with a more limited role. It’s not a bad thing, it’s just not worth a first-round pick.

Dynasty ADP has been steadfastly lower on Davis, however, week one may just be enough to boost that. With 10.8% expected points and a 16% target share, he profiles as fungible points week to week.

Mecole Hardman is easier to acquire if you are looking for this kind of upside, to be honest.

Team old guy rides again! I enjoyed Landry’s return in week one as much as the next player, but I think he has a lower weekly upside. Michael Thomas took the lead (23%) and Landry’s 16% expected point share suggests the volume is there. But the volume will not always equal nine targets for 114 yards.

It is worth our time to look at 20% target share players who were below 15 PPG last week. Let’s see if we can’t spot the “bad game, good season” players.

I don’t need to belabor the point here. The “monsoon game” took away our chance to evaluate Trey Lance and Justice Fields not to mention a lot of points from the San Francisco stud. If you had any concerns about Brandon Aiyuk cutting into his targets – while it remains to be seen, for sure – I think week one was reassuring. Samuel’s 28% of targets should pay off soon.

If anyone out there is still afraid of the player who gets all the targets because – I don’t know why – but make sure you take one last swing at Johnson in a trade before week two hits – if he’s not on your roster. He’s getting all the targets and 12 points a game is a nice “bad” week.

It was a surprising and solid week for the once favored “sleeper.” But I can’t bring myself to believe in it, to be honest.

If anything like his week one volume keeps up (and he doesn’t lose it due to his inefficiency), then he could score some points. But I’d prefer the second-round pick he’d fetch you right already.

I’d love to talk about how great Smith-Schuster’s week one was, but it was just nice… just not what we should get from a game like that.

Noah Brown did well last week. But Lamb, Dalton Schultz and Brown all broke the 20% target share mark last week, and the expected value without Prescott should be lower. So ultimately, if he’s tradeable, I’d trade him away.

In any case, we are going to know a lot more by the next time I get to talk to you. Let me know what you think, and I’ll see you after week two.

Thanks Peter! I love to see this type of article evolve as the season goes on, especially with so many young and talented WR’s in the league.

thanks for checking it out, let me know if there’s anything or anyone in specific you want me to add, half the battle is trying to focus the data tbh, lol, thanks again