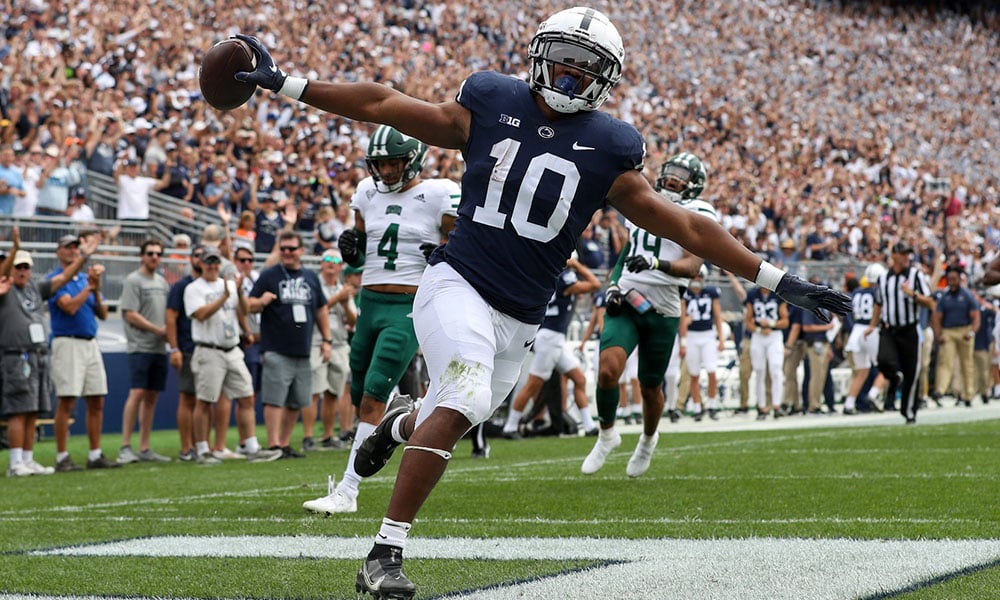 We round up some of the top college performances from the weekend’s action.

There was more than enough college football action to keep us entertained on Saturday. There was a slugfest between Alabama and Texas along with some devastating upsets. Just like any other week, there were devy prospects who shined and others who didn’t live up to expectations.

Let’s take a look at some of the top devy prospects from week two.

Williams chucking balls to Jordan Addison is fun to watch. We are seeing him take a major step in his development this season. It’s fun watching USC being able to sling the ball all over the yard and put-up points on the scoreboard at will again. Against Stanford, he completed 20 of his 27 pass attempts for 341 yards and four touchdowns. He spread the ball to eight different pass catchers.

After an up-and-down performance against Notre Dame, Stroud found his get-right game against Arkansas State. He did what he needed to do by being dominant against inferior competition. He passed for 351 yards and four touchdowns while leading Ohio State to a 45-12 win. Ohio State’s next game will be against Toledo in week three before they start conference play against Wisconsin.

Hooker was making his case for his draft status last season. He’s not the flashiest quarterback prospect but has proven to be efficient against SEC-level competition. Hooker led Tennessee to a win against Pittsburgh by completing 27 of his 42 pass attempts for 325 yards and two touchdowns. Right now, he’s a guy to keep an eye on because his draft stock could go either way between now and draft season.

Tucker is NFL-ready. We don’t need to see much more of him at Syracuse, he’s good to enter the draft and play on Sundays. Against UConn, he rumbled for 112 yards and one touchdown. This was his 13th 100-yard rushing performance in his career. Last week he achieved 183 total yards against Louisville. We saw the dominance last season, and we are seeing it now.

In three games, Brown has 496 rushing yards and two touchdowns. He posted another big performance against Virginia in week two. Brown is a very explosive running back when he gets the ball in space. Illinois will play Chattanooga next before hitting heavy in conference play for the remainder of the season.

He breaks away for an 81-yard @AlabamaFTBL TD pic.twitter.com/Somi0OZpkP

McClellan exploded for an 81-yard touchdown run against Texas. Unfortunately, that would be most of the action we would see from him in this game. He got his bell rung on a hit. The long touchdown run gives us a peek at his size-adjusted speed and what he could develop into if he continues to progress in his development.

I was looking forward to this matchup against Alabama. I wanted to see how Robinson looked in this game. Overall, he didn’t disappoint. This was a scrappy contest between the two teams. Texas took Alabama to the wire and had them on the ropes. Robinson rushed for 57 yards and one touchdown while also catching three passes for 73 yards. His ability to catch the ball out the backfield and get yards after the catch keeps him viable in negative game scripts. If anything, that should add to his floor going forward.

Vaughn is the Rey Mysterio of college football. For a running back of his stature, you expect the fall-off to happen, but he continues to 6-1-9 his way for 145 yards and two touchdowns. Last season he produced 1,872 yards from scrimmage and 22 total touchdowns.

#Arkansas RB Raheim “Rocket” Sanders again with another big run. Might be talking about him as a potential top RB heading into 2024 class. He’s got it all plus the receiver background (played out wide in high school). pic.twitter.com/5cfEieejjv

Sanders reeled off his second-straight 100-yard performance of the season against South Carolina. He’s a big physical running back who is a nightmare to tackle once he gets going. Sanders should become a household name by the end of the season and is on a trajectory of being one of the top backs in the 2024 NFL Draft.

We’ve been waiting for Singleton to break out all off-season. The five-star running back is on track to being one of the top prospects in the country after torching Ohio for 179 yards for two touchdowns while averaging 16.9 yards after contact per attempt. This should be one of many huge performances that we will see from Singleton over the course of his career.

Perry is an under-the-radar prospect who has been slowly gaining steam in the devy community. He posted his first 1,000-yard season along with a 30.05 percent market share of Wake Forest’s passing production last season. Now we are seeing him start this season in a similar fashion by catching five balls for 142 yards and one touchdown against Vanderbilt. He will be in the mix of the 2023 NFL Draft. I doubt he will be considered a top prospect, but there’s a chance he could garner some buzz during the draft season if he continues to produce this season.

Mims has been a devy roller coaster over the last couple of years. He has been productive enough from a market share perspective with a 19.08 percent market share of Oklahoma’s passing production during his last two seasons.

Harrison Jr. was a nuanced route runner at the high school level. We’ve seen him improve his athleticism over the last year or so. He is developing into a very good receiver. Against Arkansas State, he balled out, catching seven balls for 184 yards and three touchdowns. I can see debates on which Ohio State wide receiver is the best asset to roster in devy.

Addison is making his case for being not just the top wide receiver in the nation but as a dynamic dynasty asset in the near future. More than likely, he is so good that he got Kenny Pickett a first-round bid. We saw him dismantle Stanford for 172 yards and two touchdowns. Addison should continue to post big numbers throughout the rest of the season. For me, we can wrap him in bubble wrap and get him ready for the draft. I don’t need to see anymore. He’s ready.

The connection between Hendon Hooker and Cedric Tillman is one of the most underrated in college football. In a tough game against Pittsburgh, Tillman caught nine passes for 162 yards and one touchdown. The fifth-year senior is looking to produce his second straight 100-yard season. Considering we’ve seen Tennessee wide receivers gain steam during the draft process (Velus Jones and Josh Palmer) the last couple of years, we might want to keep tabs on him in 2022.

Mayer caught eight balls for 103 yards on 13 targets in a losing effort against Marshall. He owned a 46.66 percent market share of Notre Dame’s passing offense. The Fighting Irish are now 0-2 and Mayer is one of the few bright spots. He will be one of the top tight ends in the 2023 NFL Draft. Since he’s a key piece to the passing offense, Mayer should cap off his collegiate career with a decent stat line.

Bruce Matson
Contributor at Dynasty League Football
I'm a financial counselor for a hospital in South Central Ohio. I graduated from Muskingum University with a bachelor's in business while minoring in Economics and Accounting. I won my first fantasy football title with Jake Plummer as my quarterback.
Latest posts by Bruce Matson (see all)
Devy Fantasy Football Wrap-Up: Week Two