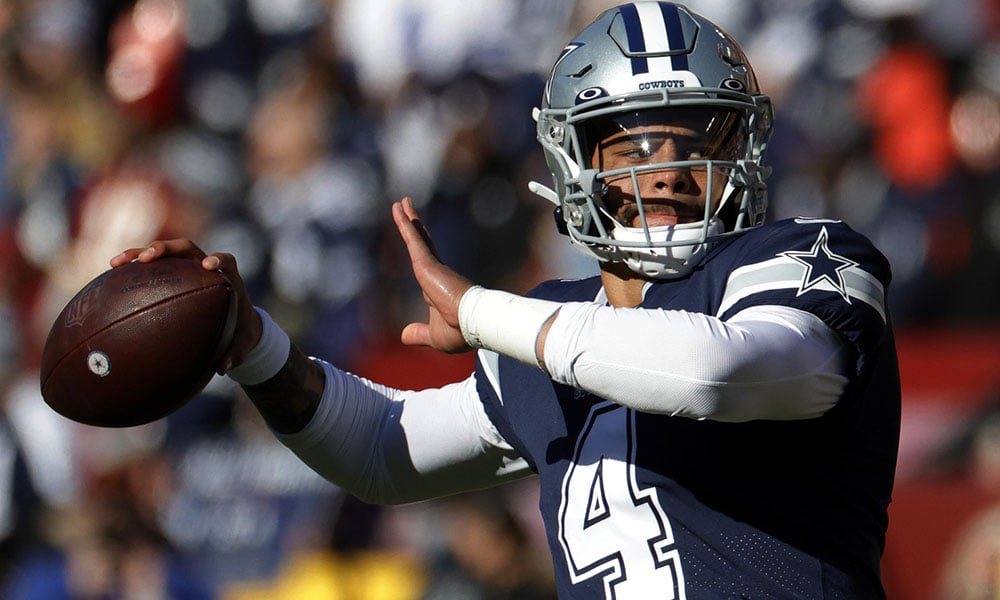 We break down the injury to Dak Prescott.

The Dallas Cowboys were well on their way to a terrible season opener against Tampa Bay on Sunday Night, trailing 19-3 in the fourth quarter. Their night got much, much worse when quarterback Dak Prescott injured his throwing hand late in the game. While the exact nature of his injury still isn’t exactly known, it’s clear he’s going to need surgery and Dallas has already said he’s out several weeks. The injury is the first of what will be many in fantasy leagues this year, but it has a huge impact, nonetheless. Let’s take a look at the players affected by Dak going down yet again.

Early indications say Prescott will miss somewhere around a month, though that could change depending on the severity of the injury. It does seem certain he’ll require surgery, though. It’s not much more than bad luck, but Prescott’s dynasty ranking of QB7 is in peril now as he’ll again miss a substantial amount of time. After missing most of 2020 with a gruesome lower leg injury, Prescott bounced back in a big way last year, finishing the 2021 season with 4,449 passing yards, 37 touchdowns and just ten interceptions. Expectations were naturally very high going into this year and that balloon received a giant pin smashed into it.

Moving forward, there are going to be some questions about Prescott’s durability. In all honesty, these don’t have much merit since we’ve seen many quarterbacks hurt their hands as they follow through on passes.  Still, Prescott is already 29 years old and while this injury shouldn’t derail much in terms of his career, he’s not going to help dynasty owners much for a while and his ADP is likely going to tick down a touch. Barring a total meltdown in Dallas that culminates in them getting a top pick in a quarterback-rich draft, dynasty managers should feel no need to panic, however. The Cowboys are going to have a serious decision to make. At this point, Rush is next in line to be their quarterback, but he’s far from a proven option as he’s thrown only 50 career passes in the better part of six years in the league. The Cowboys are very likely going to look at the quarterbacks in the free agent and trade market. However, that list isn’t exactly amazing as the trade options (and this is total speculation) could include the likes of Tyler Huntley, Case Keenum, Sam Darnold, Jordan Love, Nick Foles, Chase Daniel, Teddy Bridgewater, Andy Dalton, Tyrod Taylor, and Mason Rudolph. Many folks will be banging the table for Dallas to go after Jimmy Garoppolo, but the Trey Lance debut likely takes him off the market. Maybe they can lure Ryan Fitzpatrick out of retirement. Who knows.

If Rush keeps the job, he’ll be worth an add in most leagues. However, expectations should be tempered as Dallas will very likely come up with some conservative game plans to help him out.

The loss of Prescott just flat-out stinks for Lamb. This was supposed to be the year where he took the step forward into the realm of Ja’Marr Chase or Justin Jefferson and losing Prescott just makes that nearly impossible. Lamb is still going to get his targets, but the explosive plays we’ve come to expect from him may be few and far between for a while. While Lamb’s dynasty value won’t go anywhere, his short-term value is going to be that of a WR2 than a rock solid WR1 until Prescott returns. One of the few promising tidbits from week one for Dallas was the play of Elliott, who had 52 yards on just ten carries. He and Pollard are going to be relied on even more now with Prescott out of the lineup. Defenses are going to stack the box against these two, but an increase in volume could prove to be enough to mitigate that. Elliott’s days as a premier option are over, but his value shouldn’t crater here, either. As for Pollard, an increase in short passes could help him moving forward, so there’s no need to bail on him. The Cowboys really missed Gallup in their opener and Dallas needs him back in a big way. Still, much like Lamb, the Prescott injury is going to affect his short-term weekly ceiling. While he should be able to sustain some decent weekly value, dynasty managers are going to be hard-pressed to use him in their lineups any time soon. If there’s one Cowboys pass catcher who may not be affected, it could be Schultz. You would expect a relatively conservative game plan from Dallas moving forward and Schultz looks like the perfect security blanket for a backup-caliber quarterback. Dynasty owners shouldn’t see too much of a drop-off from Schultz, though the red zone may be tough for Dallas to see very often in some weeks. The Cowboys are really hurting at receiver with Gallup out and Amari Cooper in Cleveland. The rest of the roster features Jalen Tolbert (who wasn’t even active this week), KaVontae Turpin, Dennis Houston, Noah Brown, James Washington (who is also injured) and Simi Fehoko. Expecting some kind of breakout from this group in the short-term would be asking for a bit of a miracle.

I have a question. Am I crazy for considering trading CeeDee Lamb for two 2023 first round draft picks? I know he checks all the boxes, but I just don’t see him a a truly dominant WR like some do. What do you think?

I am trying. I am shopping him to half the league. If I can’t get two 1st rounders (between 2023-2025), I will most likely wait until Dak is healthy and they have a new coach, and there is more hype about him then than there is now.

I’d do that in a heartbeat.