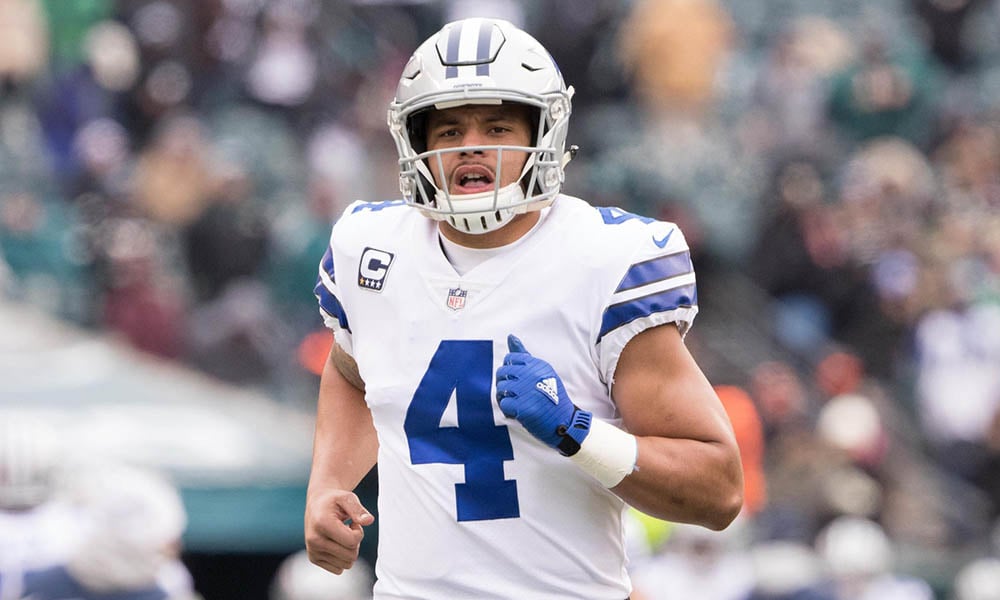 We open up the dynasty mailbag to answer your questions.

Hey, loyal Dynasty League Football universe. I’ll be answering your mailbag questions for the remainder of this off-season and couldn’t be more excited to do so. As camp continues to heat up, and we have real-life preseason NFL games the news is starting to heat up. We’re getting close to “point-scoring season” (all rights reserved @DynastyOuthouse) and it’s no longer just about the projection of value. Now we need to start projecting points, as well as continue to look for opportunities to sell high on players who are generating buzz. In short, it’s full-on fantasy football season, and you have questions and I have answers!

First up we have a safety dance question.

@ShaneIsTheWorst mailbag question for @DLFootball: Who would be on your “All-Safe” team? Meaning players with the highest floor/least likely to bust any given week. 1 starter for each position!

This is the perfect “point-scoring season” question. I’m going to take off my dynasty hat and just look at who I trust in 2022 to provide the most points on a consistent weekly basis, with no regard to how I could use that information to pull off a trade (probably).

As usual, DLF provides a tool for this task that will help answer this question.

This provides data for us to utilize when looking at high fantasy scoring upside and consistency. The Scoring History App provides a multitude of ways to look at scoring, but for this exercise, I wanted to look at the % function of the tool. This allows us to take a look at how often a player has finished as an RB1, RB2, etc., over whatever period of time we choose.

Looking at the table above, we can see that Christian McCaffrey has finished as a top-five running back in 70% of games he’s played over the 2020 and 2021 seasons. The issue with McCaffrey is that he’s only played ten games during that stretch. Derrick Henry is a distant second with 37.5% of his games finishing as a top-five scorer, but he falls to sixth in top-12 finishes. Conversely, Alvin Kamara finished as a top-five back at the sixth highest rate, but as a top-12 back at the second highest rate. Considering the questions without Sean Payton running the Saints offense and his inefficiency last year, I’ll also pass on Kamara. Instead, my pick at running back is Jonathan Taylor. Taylor finished with the fifth highest rate of top-rive weeks over the past two years while ranking fourth in top-12 weeks.

What’s awesome about this tool is that I can scale it for what I believe to be the most pertinent information. And at the wide receiver position, that’s exactly what I did. Though targets are earned, we also need to take into account that multiple receivers have changed teams from last year, namely Davante Adams, Tyreek Hill, and AJ Brown. A few players on this list haven’t changed teams: Cooper Kupp, Deebo Samuel, and Justin Jefferson. Though both Kupp and Samuel had more top five and top 12 finishes last year, I’m going to use some art to project Justin Jefferson to be the most consistently high scorer at the wide receiver position. While Kupp and Samuel have to deal with added competition (Allen Robinson), or a new quarterback (Trey Lance), all Jefferson has to contend with is a new offensive scheme. But that scheme just so happens to be the one that made Kupp the WR1 by 4.4 points per game last year. With former Rams offensive Kevin O’Connell coming to Minnesota as their new head coach, imagine the opportunity that Kupp saw last year (191 targets) tied to the ability of Jefferson. I fully expect Jefferson to finish as a top-five wide receiver in 80% of his 2022 contests.

At tight end, he may be getting old but Travis Kelce is almost an automatic top five at the tight end position, with 70.97% top-five finishes over the past two seasons, and the subtraction of Tyreek Hill could see Kelce’s targets per game reach 2020 levels (9.7 per game). Finally, at quarterback, I’m going to shock you and go with Dak Prescott. Prescott has finished in the top five at the second highest rate, and in the top 12 at the third highest rate over the past two seasons. Even without Amari Cooper and possibly Michael Gallup to start the year, Prescott still has CeeDee Lamb, Dalton Schultz, and rushing ability that’s been on the back-burner the past couple of seasons.

Our next question relates to camp/preseason hype:

Of the preseason hype players which player are you most concerned about disappearing when the season starts:

I'm sure there is more I'm missing

Let’s eliminate Trey Lance and George Pickens from this list. I have little to no concerns with Lance. Either he’ll be a good enough passer to provide fantasy production, or he’ll rely on his legs to provide production. While I’m pro “trade George Pickens” for a haul, I think he’s going to have a role in Pittsburgh’s offense immediately. Pierce should be given every chance to corral the Texans backfield considering his competition is not stout and he showed enough during college to believe he can be useful on all three downs.

Not included on this list is the Kansas City Chiefs darling Isaiah Pacheco, but he along with Romeo Doubs are the two players I’m most concerned about disappearing once the season begins. These players both share draft capital risk, as Doubs was a fourth-rounder and Pacheco was a seventh-rounder. The hit rate since 2015 at those positions, with that draft capital, is not great. While I can’t use draft capital to differentiate between the two, their college production did differ with Doubs having a more dominant college career. Using the DLF College Market Share App, we also see that Pacheco wasn’t used much as a receiving threat in college, which is not what you’re hoping for in PPR leagues. It’s not as if Doubs completely out-classed Pacheco, though and the running back position is an easier one to break through, since they are the proverbial one injury away from starting. Plus when running backs ascend in the depth chart, they see a giant spike in opportunity. As an aside, looking at the dynasty trade markets for the respective players, Pacheco is already garnering some second-rounders, which could probably insulate his trade value even if he doesn’t win the Chiefs starting role in the preseason.

Who are your favorite WR3's that could possibly make an impact on fantasy this year? I.e. Danny Gray, KJ Osborn, etc.

Based on the way this question is phrased, I’m going to assume the question refers to an NFL team’s WR3, since Danny Gray and KJ Osborn fall well outside the WR3 range in ADP.

This one is easy for me: Tyler Boyd. Despite playing on an offense with the WR5 in points per game last year (Ja’Marr Chase), and the WR13 (Tee Higgins), Boyd was still able to score 11.5 PPG on his way to a WR38 finish. He was able to produce despite seeing just a 17.4% target share, and 5.5 targets per game. If the Bengals scheme more heavily towards the pass in 2022 and Boyd were to receive even a modest boost in targets – say to the 6.8 targets per game (19.5% target share) that he saw in 2020 – he could easily match his 2020 PPG of 12.8. If anything were to happen to either Chase or Higgins, then Boyd would likely see his target share and PPG could reach the levels he saw in 2018 and 2019 when he finished as the WR20 and WR27. There are multiple paths to Boyd outproducing his WR56 ADP, and I prefer him to many wide receivers going in a similar range of drafts.

Can you elaborate more on your George Pickens take? Seems you are a sell on him but for a large return. I drafted him to be on a team that is rebuilding and is one season away from competing. I felt Pickens seems like a great piece to build around so I’m definitely interested in your sell opinion. Thanks!

If I’m going to trade him I need more than it cost to acquire him. Obviously, some of it is subjective, but as I noted in the article I have 2023 1st round picks as being worth more. Now, taking into account the amount of hype that he’s received I want to squeeze even more value out of any trade I would move him in. Even in a rebuild I’m not opposed to selling young players if the return is really good, I wouldn’t trade him for something I consider to be a lateral deal.

Makes a lot of sense. I just posted him but I’m not optimistic. Most of my leaguemates need to not just win any trade but slaughter the trade partner. I definitely don’t mind keeping him. We’ll see!

Good luck. No reason to trade him unless you love the return.

In year 2 of a rebuild. Have 5 first round picks but none of top 4. I think my WRs are solid and don’t really need help. My WR are Chase, McLaurin, Jeudy, Elijah Moore and Toney. Is this a good enough WR group to focus my picks on other positions instead of WR or should I just take best available?

Could you trade one of the earlier picks plus someone like Jeudy for a Tee Higgins? I would try something like that, if forced to make all my picks I’d go BPA.

I’ll see what I can do. Im hesitant to overpay for Higgins since I already have Chase

Another player in that range works too.

Thanks for the inclusion in the article! Awesome way of looking at the “floor” for players. Im going to look more closely at that app for my one-redraft league.

We have a ton of great tools at DLF. I love them, not just as a company shill, I actually use them.

trade question for 12 team, .5. Seems I hit in the rookie draft with Pickens, Doubs and Pacheco but also drafted Burks in the first. I already have Davante, Waddle, E Moore and R Moore at wr. RB is thin with J Williams, Dillon, Gibson (sigh). Im eyeing someone like Pollard or maybe even Montgomery since I do have K Herbert. What receiver would you move first for another back or would you try to pair one with gibson and try for a rb1? Although not a lot of interest for Gibson around the league right now. Thanks in advance