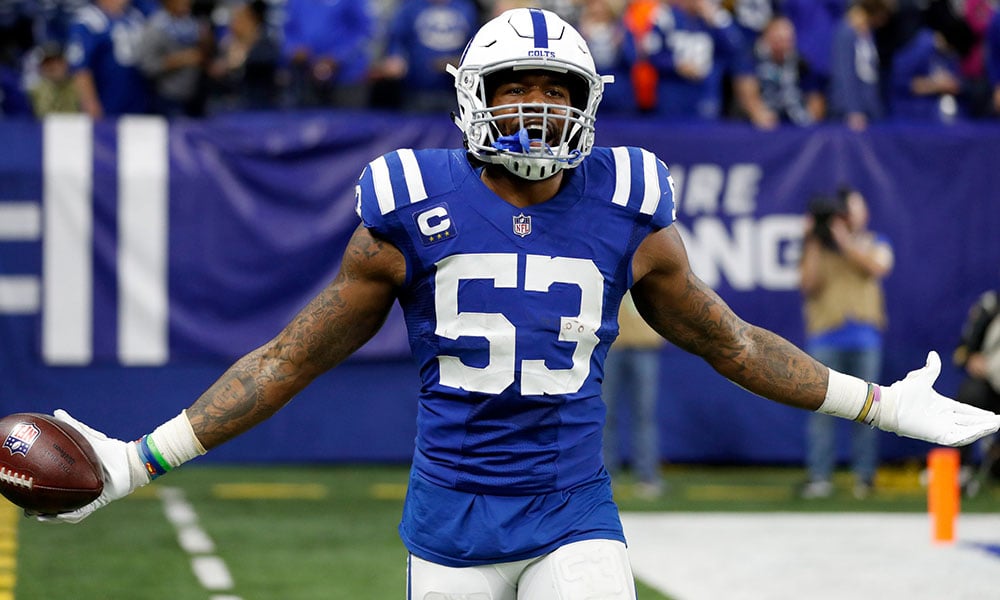 Tom Kislingbury highlights the linebackers to target in your IDP leagues.

In the current era, linebacker is becoming a protected species. A few years ago, the position was flooded with talent and volume, and it was easy to simply stream linebackers all season long. That is no longer the case.

This has created scarcity and differentiation. The top tier of fantasy LBs is simply the shrinking number of LBs who play every single snap. That last disclaimer is a big one, and injury will derail the 2022 season. In week one of 2021, 67 LBs played at least 30 snaps. Let’s call them ‘starters’. Just 14 of them (21%) played in all 17 games of the season. The vast majority of defenders in the NFL miss games with injury now.

Regardless of that fact, right now we can predict which linebackers will see a full workload as long as they stay healthy. These are the players you should be starting every week.

A year ago, we were expecting rookie Zaven Collins to walk into a full-time job. Obviously, that did not happen, as he was not ready.

With Jordan Hicks departed to Minnesota, the Cards are looking for a new full-time guy. Isaiah Simmons is not that sort of player, given he splits time between playing LB and lining up on the edge. So, there’s every chance Collins is the top IDP LB this season.

This is the first of many teams who are a mess. Deion Jones played poorly in 2021 and there are strong rumors that he will never play another snap as a Falcon.

Mykal Walker has played OK in spots, the team added failed first-round pick Rashaan Evans, and they drafted Troy Andersen in the second round of this year’s draft. In all likelihood, we will see a smorgasbord of these guys all owning a full-time at various times through the season, with Anderson looking the most likely to be the man in possession in a year’s time from now.

The Ravens are unlikely to give any LB a full-time role. In fact, no Ravens linebacker has played 1,000 snaps since CJ Mosley in 2017. Patrick Queen is likely to lead the unit in playing time again, but he’s played just 1,684 regular-season snaps in his two seasons as a pro. That’s not just due to unavailability. The Ravens deliberately take him off the field in certain situations.

The Bills love to rotate their defensive line but leave LBs and their secondary on the field for every snap they can handle.

As things stand, we should expect Tremaine Edmunds and Matt Milano to be full-time players. Both carry some uncertainty though. Milano has proven a little injury-prone and Edmunds has underwhelmed. It’s not certain at all he’ll be a Bill in 2023, so keep an eye on him.

Under Matt Rhule and Phil Snow, the Panthers have leaned heavily into a single-LB defense. As such we can expect them to (again) deploy just one full-time LB, with safety Jeremy Chinn moving into the box a lot. Shaq Thompson is extremely likely to be that guy.

Matt Eberflus has taken over as the new Bears head coach, and he’ll bring his (extremely vanilla and boring) defense with him.

He’s wavered a little with how he deploys his linebackers, but it’s unwise to expect Nicholas Morrow to match Roquan Smith as a full-time player. It could happen, as he’s not significantly worse than Bobby Okereke (who is poor), but don’t count on it.

In the last seven seasons, a Bengals LB has breached 800 snaps just one time: Nick Vigil in 2019. No one else has managed it since Vontaze Burfict in 2013.

Logan Wilson was on track to play last season, but he got hurt. That’s what happens in the modern NFL.

Wilson is the sole full-time potential in 2022, but that’s a good reminder that just staying healthy is a tough ask.

A Browns LB hit 50 or more snaps just 16 times in 2021. Obviously, that’s about once per week on average. This Browns defense like to have a third safety on the field, so there’s only one full-time role available and it would take a brave man to bet against it being sophomore Jeremiah Owusu-Koramoah.

One of the biggest questions in IDP is what the Cowboys do with Micah Parsons.

In 2021 he played as a full-time DE in four weeks (when injuries forced it) but in other weeks lined up as a true edge on around 20-25% of his snaps.

That meant that he was one of the least efficient LBs in the NFL in tackling terms with a tackle on just 7.7% of his snaps. He recorded 14 sacks which more than made up for it, but that’s an extremely risky thing to expect to continue.

Parsons is going to be a full-time player, but the gamble is whether it translates into points. He’s being drafted and valued significantly higher than any other LB, so you’re currently paying based on him being the undisputed top scorer.

It goes without saying there will not be any others. The weekly top LB not named Micah Parson averaged just 47 snaps per week last season.

There’s very likely to be a single, full-time LB for the Broncos this season, and the man in early pole position for the job is Josey Jewell. However, we know his limitations as a player, and the team has to be hoping they can upgrade.

With Jonas Griffith, Alex Singleton and Justin Strnad on the roster (not to mention Barin Browning who seems to be moving to the edge), we can expect in-season changes.

Alex Anzalone played just about every snap for the Lions’ first 12 games last season before getting injured and playing just 20 more snaps all season.

There’s likely to be a single, full-time role again in 2022and it should terrify Lions fans that Anzalone again looks the favorite. Derrick Barnes did nothing as a rookie and is a long shot to come good. Malcolm Rodriguez is a sixth-round rookie. The history of those guys is not good.

Famously De’Vondre Campbell came out of nowhere to seize the lone Packers LB job last season. He was fantastic in NFL and IDP terms and earned his big, new contract.

And then the team confounded us all by selecting Quay Walker in the first round of the draft.

It’s obviously possible the Packers try to play more two-LB snaps, but bear in mind that would likely create more unfavorable mismatches. Rookie LBs just do not stand up well to NFL passing offenses which is why we see so many of them play limited snaps.

It’s much more likely that Walker plays 500-ish snaps and is brought along slowly with Campbell continuing to dominate the position.

Lazy analysis in 2021 said that Lovey Smith was simply going to roll out his classic Tampa-2 three-LB system in 2021 like the last decade of defensive development had not happened.

He certainly did err high on that front, but that was comparative. In real terms, the Texans deployed three LBs on just 33% of snaps.

At the same time, the Texans chopped and changed personnel looking for someone (anyone) to actually play well. This meant that four different LBs led the unit in weekly snaps at some point, and none played 800 or more defensive snaps last season.

We might well see a similar muddle in 2022. Christian Kirksey and Kamu Grugier-Hill start the season as top dogs, but rookie Christian Harris is likely to get a shot at some point. Not to mention replacement-level journeymen Jalen Reeves-Maybin and Neville Hewitt.

Under Matt Eberflus, both Darius Leonard and Bobby Okereke played over 1,000 snaps in 2021.

With Eberflus gone to Chicago, and Gus Bradley taking over that’s extremely likely to not happen again.

It’s true that Darius Leonard is likely to be an every-down player for him, but there is a very strong possibility he is the only LB to be so.

With Mike Caldwell running the Jaguars, we can expect to see two full-time LBs.

They gave Foyesade Oluokun a huge contract, and drafted Devin Lloyd in the first round, so we can assume those guys will get a strong head start for those jobs.

A lot of fans love Chad Muma, but the track record of third-round LBs (particularly as rookies) is not inspiring. You might have to file him alongside Scooby Wright.

It’s common knowledge by now that the Chiefs like to substitute their LBs to ensure the right skill-set is on the field at the right moment.

Nick Bolton was a good IDP in 2021 with his unholy tackle efficiency, but sadly that’s not something you should be counting on continuing into the future. He averaged under 40 snaps last season, and his usage is unlikely to drastically increase. That’s a tough situation for a linebacker.

Tom Kislingbury
Contributor at Dynasty League Football
Being from England Tom only discovered American Football in the late 90s. From there he's gone from casual defender to devoted obsessive and likes to delve into deep data primarily about defensive players. He spends his days trying to pretend the spreadsheets and graphs he makes about football are actually work for his day job. No-one is fooled.
Latest posts by Tom Kislingbury (see all)
IDP Dynasty Fantasy Football: Full-time Linebackers in 2022, Part One

Not being snarky – I honestly love that Tom believes with all his heart that there are like 5 good defensive players in the NFL. Read & React episode idea Tom – just go down a list of the top IDPs & let’s see how far you can make it before you get to “Eh, he’s fine.” 😂