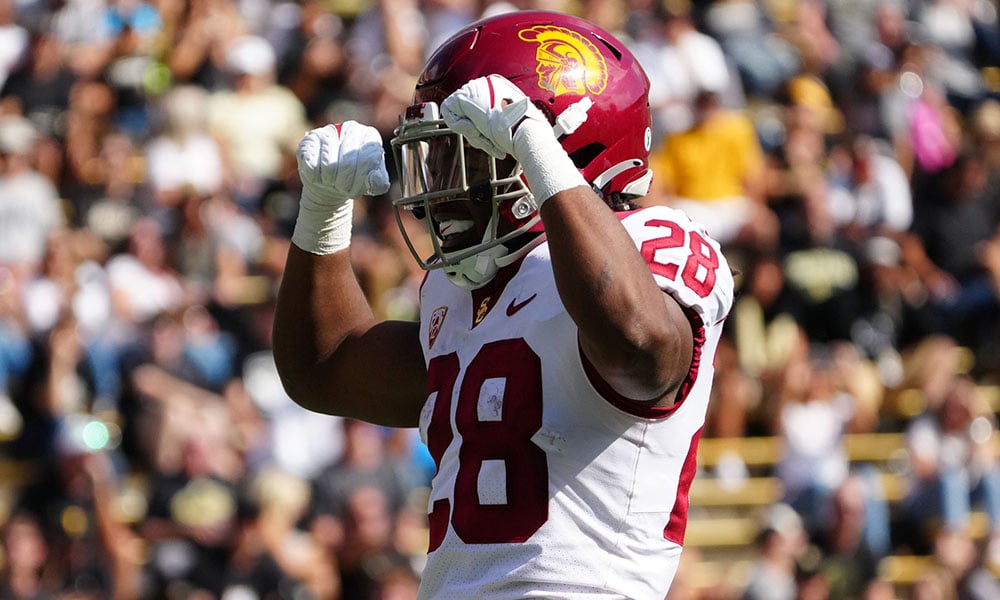 Late-round picks hardly ever pan out. Maybe in the course of your life, you can get one or two to make it work, and historically there’s been at least one good player to be found later in the draft. I’m here to help you figure out what positions pan out the most, and who to look for this year.

In previous years, we have the following fourth-rounders who far exceeded their return on investment:

This is not a bad list to be a part of. There are no quarterbacks or tight ends listed here, so the focus of this article will squarely be on running backs and wide receivers.

What the above running backs have in common is that they were all taken late in the NFL Draft, all had amazing burst scores, and all were expected to start the season as a backup to someone who was not guaranteed to hold the position.

Now that some parameters have been set, let’s look at a small list of potential candidates to be lottery tickets in this year’s rookie draft.

I’ve written about him before, and I’m still perplexed as to why he wasn’t more heavily desired by other teams. He’s a sixth-round pick, his speed score (4.52 at 221 pounds) is in the vicinity of the other draftees mentioned above who found success, and he’s on a team where the only other real option is oft-injured James Conner. Ingram isn’t even being drafted in some rookie drafts, which I think is borderline criminal.

I gave Ingram a late second-round grade before the draft, and other than the fact he fell slightly further than I expected, I like everything else about him. If you need a running back and you’re desperate to find one late, I think Ingram is a solid choice. I wouldn’t hesitate to take him with a mid-late third, let alone a fourth or later.

I don’t think he’s a long-term solution for the Cardinals, but I think he can give you a solid rookie season, and then you can choose whether to flip him for a profit or to keep him around for another season or two before he loses his value. Either way, I think you’re going to get a useful player for an inexpensive pick.

Phillips is 5’11”, 181 pounds, and a fifth-round pick out of UCLA. He isn’t a burner but he has amazing feet, evidenced by the gif below. His ability to make small moves to create space is impressive.

Tennessee doesn’t have the wide receivers it used to, and the other players on the roster are definitely going to play on the outside. It would make sense if Phillips were to compete for the slot position, and if he won the part, I feel as though he’d definitely be able to make some noise this year.

Pecheco has prototypical running back size, measuring in at 5’10” and 215 pounds. His 40-time of 4.37 seconds was tied for the best time at the Scouting Combine. The rest of his numbers were at or above the threshold necessary for a team to be interested.

The reason for Pacheco falling to the seventh round is somewhat questionable. He played behind a porous offensive line so his numbers were never that great, but he made the most of all opportunities he had with hard running and blazing speed in the open field.

This is one example of many that show defenders cannot bring him down with arm tackles alone. He has a low center of gravity and can change directions rather quickly. When he gets past the first level, he has a second gear that he uses to outrun the defense.

Pacheco’s landing spot is nothing short of extraordinary. Clyde Edwards-Helaire hasn’t exactly run away with the position, and the players directly behind him are not an immediate threat to take the position away either. This gives Pacheco a great opportunity to climb the ranks as the off-season and preseason unfold.

My last mention might possibly be my favorite simply because he went undrafted and nobody else is talking about him. White is a massive back who stands 6’1”, 215 pounds. He ran the 40 in 4.6 seconds, and was at or slightly below all measurables that NFL scouts look for.

He didn’t put up amazing numbers and he didn’t get a lot of mentions leading up to the draft, which may provide insight into why he wasn’t drafted, but his game tape is fun to watch. He plays with anger and looks for ways to carve a defense.

The best part about his game is that he’s not afraid to run inside. The vast majority of his runs that I saw were between the tackles, which is something NFL teams love when helping collegiate athletes make the transition.

Even better is that he landed on a team that does not have a lot of competition in the backfield; the Miami Dolphins. He is a Florida kid born and raised, so I think his face has been seen numerous times by the coaching staff, and it’s my guess that this will play in his favor.

He’ll never outrun a defense in the NFL, and I’m not too certain he’ll be a long-term starter either, but I think it’ll be harder to do any better than White if you have a team that uses five or more rounds to draft rookies with. I don’t think he’s a long-term starter, so buy low and sell high when the time arises.

Great article, Mike! I love seeing the late round RB dart throws. I personally feel the league has overcorrected a bit on devaluing RB and there are some great value picks here in this draft. Could be an outlier year for RB value and ROI. You could feasibly get usable committee RB’s from rounds 2-5 this season and this article really helps aim at specific prospects. Do you think White and Pacheco have added upside because of goal line use? That’s something both Miami and KC have struggled with.

I’m a little confused. This article was originally posted almost 2 weeks ago. Any special reason why it’s being posted again? Did you intend to include players you didn’t have in the original post? If so, I don’t see anyone new. Or did you plan to post a different article and reposted this one by mistake?

Yup I’m little confused as well. This is a good article with players that I will try to target as free agent but why did it have to be reposted?

@Wendall & @Phil, thanks for the comments. We re-posted it yesterday so it could get some more eyeballs on it. We typically post 2-3 articles a day in the off-season, so they can get pushed down fairly quickly. Occasionally, we’ll bump ones up that are still relevant to make sure everyone had a chance to read them. But don’t worry, it’ll never be in place of new, original content.
Thanks, Eric