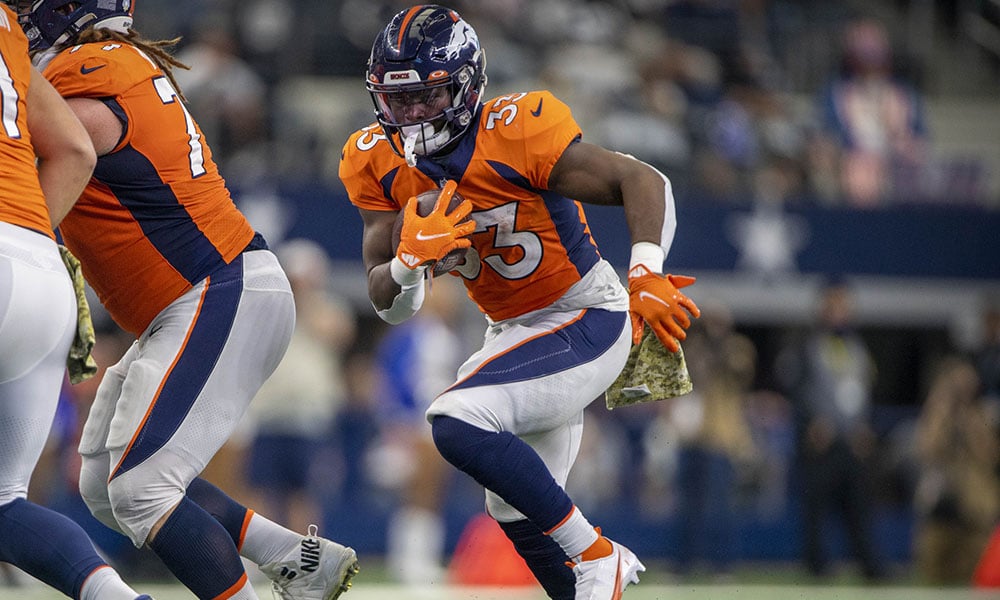 We check back in with some unanswered questions from this week’s show.

Typically, I would say that entrenched starting quarterbacks are usually worth at least a future first-round rookie pick. But in this case, the 2023 rookie class is so strong that I don’t think Wilson comes anywhere near the value of a 2023 first-rounder. The DLF Trade Analyzer also agrees with my assessment.

However, I’m sure Wilson’s value will increase after the Jets pick a wide receiver early in the 2022 NFL Draft or trade for Deebo Samuel. He certainly doesn’t carry value based on his rookie year, where he was awful.

Wilson completed an abysmal 55.6% of his passes, throwing nine touchdowns and 11 interceptions in 13 games. He also produced almost no passing volume, averaging only 179.5 passing yards per game. I know he was a decent prospect entering the NFL, but I’m not sold on buying Wilson low, let alone for a 2023 first-rounder.

Marco VM – Hold on to Terrace Marshall or Nico Collins?

Honestly, I wouldn’t bet on either Marshall or Collins becoming fantasy relevant in their NFL careers. But, looking at their weekly fantasy performances, it’s clear that Collins is the better choice. As you can see, Marshall failed to score more than five fantasy points after the first three weeks, as the Panthers made him a healthy scratch in multiple games. In contrast, Collins had a couple of double-digit performances in weeks 14 and 16 and a few other decent games throughout the season. Collins totaled 33 receptions on 60 targets for 446 yards and a touchdown, while Marshall only had 17 catches on 30 targets for 138 yards.

Of course, neither the Texans nor the Panthers have a strong quarterback situation, and both players face target competition. The Panthers have a clear WR1 in DJ Moore and target hog Christian McCaffrey at running back. They also recently extended Robby Anderson, who will serve as their nominal WR2. The Texans don’t have many other receiving weapons beyond Brandin Cooks, but they have significant draft capital to select another wide receiver to compete with Collins for targets.

Overall, though, there’s just no track record for players who flop like Marshall to go on to succeed in the NFL or fantasy football. DJ Chark is the only high-drafted player I can remember who was as bad as Marshall as a rookie before breaking out as a sophomore. Collins wasn’t excellent as a rookie either, but he at least flashed some potential.

PJ Kennedy – Rachaad White could be good in the NFL

White had a solid career at Arizona State after transferring there in 2020.

The COVID-19 pandemic cut his 2020 season short, as Arizona State only played four games. However, he averaged 10 YPC on his touches, scoring five touchdowns. Additionally, he demonstrated his skills as a pass-catcher with eight receptions for 151 yards and a touchdown.

Then in 2021, White blossomed. He regressed to 5.5 YPC on more significant touches, but he broke out as a true pass-catcher. 43 receptions for 456 yards and a touchdown represents excellent receiving production for any college running back. For comparison, White had more receptions and receiving yards in 2021 than Breece Hall did in any of his college seasons.

However, White has some red flags. He failed to produce consistent numbers until 2021, when he was a 22-year-old player competing against younger opponents. Therefore, he’s 23 years old entering the NFL, making him an older running back prospect.

Unfortunately, the worst news for White is that it seems like the NFL doesn’t have the same interest in him as the dynasty community. NFL Mock Draft Database has White as a fourth-round pick at 116th overall. He’s the ninth running back in their projected draft rankings, behind Hall, Kenneth Walker, Isaiah Spiller, James Cook, Dameon Pierce, Brian Robinson, Kyren Williams, and Tyler Allgeier. But White is the RB4 and 12th overall player in DLF’s April rookie ADP and RB4 and 14th overall in DLF’s consensus rookie rankings. There’s simply a massive disconnect between the NFL and the dynasty community on White. Once he goes on Day 3, I expect him to lose significant dynasty value compared to his pre-NFL Draft price.

It’s been a long time since we broke live news on the show, but Gordon re-signed with the Broncos while we were on the air. The Broncos gave him a one-year deal worth up to $5 million, although it’s unclear how much of that contract is guaranteed money. I mentioned this on the show, but I still rank Javonte Williams at RB4 in dynasty even after this signing, behind only Jonathan Taylor, D’Andre Swift, and Najee Harris.

Gordon and Williams split work almost exactly equally, with 203 carries each. However, Williams outperformed Gordon in the passing game, with 15 more receptions and 103 more receiving yards. Plus, the Broncos now have Russell Wilson at quarterback, replacing the ineffective Teddy Bridgewater. If Williams gets a few more carries, he can easily be an RB1 in a Wilson-led offense. Even Rashaad Penny saw RB1 value down the stretch in 2021, and Williams is a far superior player. Therefore, if there’s even a slight discount on Williams in dynasty leagues, I would pounce and buy him.