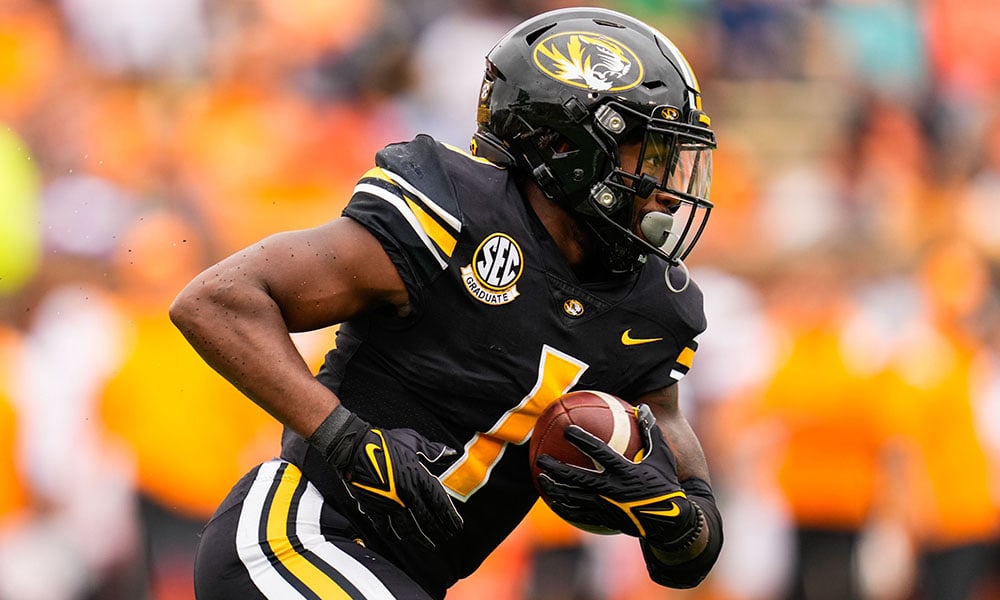 We look at some of this year’s deeper running back prospects.

Now that the NFL Draft is drawing near and dynasty owners all across the country are making their draft boards, it’s time to start helping by reviewing all running backs in order of current average draft position. Not all players pan out at the NFL level, so let’s be critical at times that require it.

Why should you listen to what I have to say?

Prior to writing for DLF, I was a running back coach who traveled the East Coast attending coaching clinics and seminars. I’ve talked with scouts and studied with offensive and positional coaches, and learned which characteristics make elite running backs and which make busts. As such, I’ve been making running back reviews for the past several seasons. While nobody is perfect, this provides me with a unique perspective.

This is part four of a multi-part series. The rest of the series can be found here. A lot of the running backs mentioned in this particular article will be quick hitters, since most of these rookies will be backups or lower for their career.

Badie is a little guy with a high motor. At 5’8” and 197 pounds, he’s one of the smaller backs to enter the draft, but the 1,934 scrimmage yards amassed in 2021 are no joke. He’s a dual threat out of the backfield whose quick-looking tape is supported by his decent combine numbers (4.45 40-yard dash and 10’1” broad jump, both above average). A shifty back who won’t go down with an ankle tackle, a defensive lineman will have to wrap him up to stop him due to his size. He doesn’t do anything amazing (his skillset won’t wow you), but he will get what’s given to him, and he’s dependable when he does it.

Simply put, Badie is a perfect addition to any shared backfield that needs a third down back. In the right system, he could get 50 catches per season. If you’re looking for a late round PPR back, this could be your guy.

Knight comes in at 5’10”, 209 pounds. He runs upright and underperformed at the combine, so there’s not a lot of wind in his sails come draft day. He likes to hit the hole as fast as possible, and he uses a slight wiggle to elude defenders and gain extra yards, but he’s less talented and less skilled than most backs in this draft.

I’d use a third rounder on him. He has a chance to be a backup somewhere, and when he gets his chance to start he may accidentally put up a huge game, and that’s when you sell for a profit. If you own the starter, I’d keep him around for as long as he’s the backup.

At 5’11”, 221, this big man can move rather quickly. He had an above average combine, which matches the quickness I see on tape. He’s patient, he sets his feet before he makes a move, he can catch, he can pass block, and he can read a defense and assess whether to leak out of the backfield or not.

To be honest, I’m struggling to figure out why he’s not projected to be a third-to-fifth rounder. He’s big enough, fast enough, and skilled enough to be a starter on day one. I don’t think his upside is anything higher than top 10 because of his low-end top speed, but I can easily see him as a consistent performer in the top 20 for a few years if he lands in the right situation. This may be the closest you’ll get to an Elijah Mitchell type of player this year.

The good news is Brooks rushed for over 1,000 yards in each of the three seasons that he played in Oklahoma. The bad is he runs upright, is a little slow, tested poorly at the combine, has a poor rush-to-catch ratio, and opted out of football in the 2020 season due to Covid concerns.

Scouts may not like the fact a player would rather avoid football for a year than to risk it and play during a pandemic. Call it cold-hearted all you want, but that’s the truth, and there’s an understanding behind it. I like Brooks as a person, but I do not want to draft him unless I need him as a backup to a starter I own. I don’t ever see him being a lead back in the NFL.

If you’re looking for a deep sleeper in the later rounds, this is a pretty good one. However, I’d only take the shot at flipping him for a profit, not for a long-term gainer. Harris is 5’9”, 222 pounds. A player this heavy and this short is like watching a bowling ball with legs, as he plays as physical as he can.

On a bad South Carolina team last year (2-10) he rushed for 1,138 yards, but all that work required him to have back surgery, which hampered his ability to perform well during his junior year. Instead of opting to return for another collegiate season, Harris is instead entering the NFL draft.

There are durability concerns, but his talent and skills are where they need to be in order for him to make a name for himself in the NFL. His interviews were on the poor side, however, so I do have concerns about his ability to transition to the pros. He will need solid coaching and a mentor to help him grow at the pro level.

I could see Harris becoming a short-term starter at some point, but nothing major and nothing higher than a top 25 back once or twice at best during career, if at all.

Ealy was the number three ranked running back coming out of high school. He does all of the things you’d want a running back to do, he just has a small frame to do it with. Ealy measured in at 5’8” 187 pounds, so he’s not going to be a lead back for any team in the NFL at any point in time.

However, given the range at which he can play, I wouldn’t be shocked to see Ealy gain value in PPR leagues, given he’s drafted to the kind of team that can utilize his talent and skills. He lacks top speed, but his burst score is insane. If he was bigger, he’d be rated much higher.

This 6’1”, 227 pound product was a battering ram for the Wolverines. He suffered an ankle injury down the stretch and did not participate in the combine as a result, so you won’t find any 40-yard dash or other drill times. In short, I wish he was more patient with the football, I wish he didn’t absorb contact the way he does on tackles, I wish he didn’t try to jump over defenders repeatedly, and I wish he had more catches to go with his rushes.

Haskins is a work in progress. I think he can be a complimentary piece to any backfield out of the gate, and perhaps take over starting duties in a limited role. He’s going to need a lot of work and patience from the coaching staff that he’s under when he’s at the pro level.

A straight-line runner who likes to punish players who try to tackle him. He played linebacker for a year before transitioning back to running back his senior season. His success is mostly due to scheme rather than talent. Top it all off with a poor combine, and you have a career backup at best.

This kid has all the traits of a starting-caliber running back, except the fact he’s only 5’9” 200 pounds – that’s on the smaller side for a running back, and most teams won’t give players of this stature the time of day to be the starter for their NFL team over the long haul.

I think Goodson has most of what I look for in a running back, and he tested extremely well at the combine. It’s a shame he weighed in about 15 pounds too little, and an inch or two too short.

This run may not look like much, but his vision is on full display. He saw the crease developing, planted the foot and burst into the seam before it opened up – that’s NFL-caliber vision that most pros don’t develop at all, let alone as a rookie.

I love this kid, but I don’t love his size. Landing spot can help with his value, but until then, he’s RBBC at best.

Price has good size and tested well at the combine, but he has very little experience and is “just a guy” on tape. He’s not terrible and will probably be nothing more than a backup with flashes of ability here and there.

I have to give at least one unranked player some love, and when a 5’10” 222 pound kid runs a 4.37 at the combine, that’s when it’s time to give it. His speed score is out of this world, which should generate some interest towards the end of the draft.

This four year player didn’t put up a lot of numbers and his run to catch ratio is too low for my liking, but I like the little I saw on tape and the combine performance to boot. I like to take a dart throw every now and then, and Pacheco is my dart throw this year.

Mike Havens
Contributor at Dynasty League Football
Mike is a 3-time graduate of Castleton University in Castleton, Vermont with full concentrations in mathematics & statistics.He has dabbled in a little bit of everything (poker tournament winner, nationally ranked in pinball, rolled several 300s in bowling) but when it comes to time spent and money gambled, fantasy football reigns supreme.
Latest posts by Mike Havens (see all)
Dynasty Rookie Draft Running Back Rankings: Analysis by ADP: RBs 13+

I agree with you about RB Keaontay Ingram, I’m going to be watching him on draft day but his landing spot will be my deciding factor as to whether I pick him up or not.