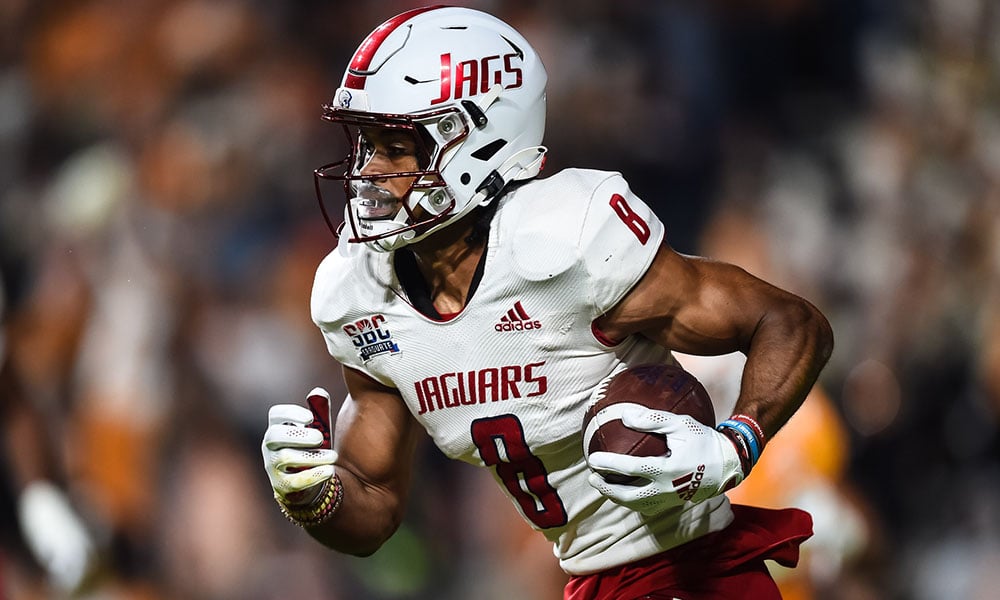 Is Jalen Tolbert going under the radar in rookie mock drafts and rankings? We examine his college profile.

Our NFL rookie profile series continues with this analysis of 2022 NFL Draft Prospect Jalen Tolbert, WR from South Alabama. We will continue to provide you with these in-depth rookie profiles and a ton of other fantasy football rookie analysis right up through the NFL Draft. Stay tuned, and stay ahead of your league.

Jalen Tolbert is an intriguing wide receiver prospect, as he played at a lower level of competition outside of the Power 5 conferences. He has some solid production, but he’s also an older player with some flaws in his profile. But he’s definitely on the dynasty radar, especially lately. So let’s jump into the breakdown!

Tolbert had a good career at South Alabama.

He wasn’t a high-profile recruit, so he didn’t have too many options in his college selection process. Then, he suffered a knee injury in the 2017 preseason, forcing him to redshirt his true freshman season. In 2018, he essentially saw no playing time, participating in five games with five catches for 60 yards.

However, in 2019, Tolbert emerged as the second receiving option behind future seventh-round NFL Draft pick of the Saints, Kawaan Baker. Baker led the team in receptions and yards, but Tolbert had more touchdowns and a higher yards/reception mark. In addition, he proved he could be a downfield threat, although he had limited volume over the entire season.