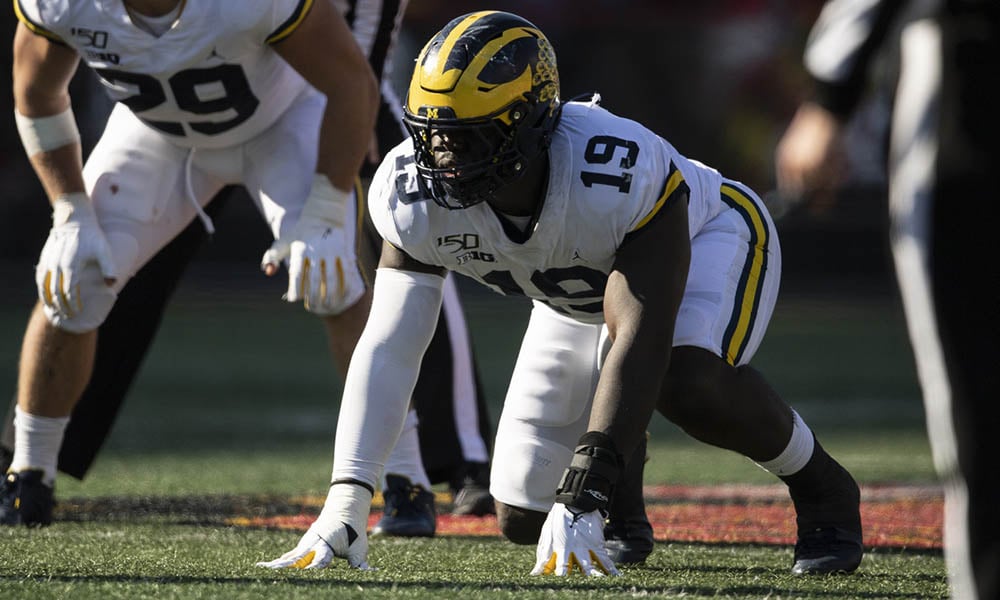 The DLF IDP staff slack channel completed a quick superflex and integrated IDP mock draft for readers to get an idea of when defensive rookies would go relative to their offensive counterparts. We have the following assumptions:

No IDP selected in the first round makes a lot of sense in this class. There’s a real lack of a total stud at any position from a talent perspective as well as a pairing in a great scheme. Waddle fell a bit but that’s not what we are here for anyway, are we?

The first IDP comes off the board right here at the start of the second round. I love seeing that first player be from the EDGE group. While it’s a position that has gotten deeper in recent years, it’s one you really want to hit early and often. Paye is a pro-ready player walking into a great situation. He can contribute from day one and has plenty of upside to reward drafters in the future.

He’s an extremely talented, well-rounded player, going to a slam dunk of a landing spot. There is very little to no competition on this roster in Washington. It makes a lot of sense to go for the near sure-thing at IDP before diving into murky offense.

Before the draft, I had Parsons as my LB1 in the class and while it’s a pretty great NFL pick and spot with the Cowboys, I moved him all the way down to LB2. It’s a crowded linebacker room with Jaylon Smith and Leighton Vander Esch but LVE clearly has some concerns related to his neck and needing his snaps managed.

Parsons can play off-ball linebacker as well as anyone and can add a ton of pass-rushing snaps if both Smith and LVE are on the field. In single-linebacker sets, Parsons likely plays EDGE and Smith stays in as well. It’s good value here for a potential star player in counting stats like tackles as well as big-play stats like sacks.

It was a good spot in a draft to take a stab at another NFL first-round linebacker in Zaven Collins, but I have Owusu-Koramoah (JOK) over him in my ranks. From an NFL perspective, adding Collins to Budda Baker and Isaiah Simmons is great but from an overall IDP perspective, I’m worried about the production. Of course, with Jordan Hicks on the way out, there’s a lot of room to run for Collins. He’s a prototypical-sized player with excellent athletic traits and is a very smart player, he also will see a lot of work as a pass rusher, something he did a ton in college.

Owusu-Koramoah, on the other hand, is easily the best linebacker and safety from a talent perspective on the field for the Browns, which should lead to many moons as an IDP talent. JOK is the definition of the modern linebacker role, excellent in the run game, can cover pretty much anyone, and is excellent when slotting into the pass rush. He is fantastic value at LB4 of the draft.

Seven offensive upside shots taken before another IDP is more evidence that this IDP class is pretty tough to really get excited about, especially in superflex where some shots at these prospective QBs of the future are extremely valid.

I like the Phillips pick here. It’s not a slam dunk scheme for EDGE production but he’s a very pro-ready player who can compete for meaningful snaps right away.

I love the value on LB5 down here at the end of the third round – Bolton could easily find his way into a starting role player very quickly in Kansas City. It hurts all of us who were big-time Willie Gay fans but there is room for both of them. I worry about Bolton’s third-down potential as he was not the best cover man in college, but is an extremely capable run defender. His willingness to take on bigger backs and sublime smarts for the position will keep him on the field.

There were back-to-back pure upside pass rusher picks here at the start of the fourth. In real drafts, this is when the IDP starts to look more attractive as more “sure” things than most of the offense here. Both Oweh and Ojulari have potentially the highest ceilings in this class.

Unfortunately in a lot of leagues, Oweh is going to get the linebacker tag, but in True Position and other leagues, he’s a massive value here. The Ravens have bled EDGE talent over the last couple of years and he will be able to come in and showcase his incredible athletic traits right away.

Ojulari is a very similar prospect. Both need a lot of refinement to their game but should see snaps very early on in their NFL careers. Ojulari gets the nod for me since he’s likely to keep the DE designation

The first safety selected, Grant can play either free or strong safety in the NFL which can be a headache for IDP players, but for now, he’s heading to a team lacking a dynamic player like him. The Falcons have brought in other free safety role players like Duron Harmon and Erik Harris, which leads me to think that Grant is in line for a less deep role in the Dean Pees scheme. It’s not an absolute gimmie, but it’s the best we have in this class.

This is good value on a mid-first-round pick and while Rousseau will get work, it will be in a heavy rotation in Buffalo. There’s some future hope that things change when Jerry Hughes and Mario Addison move on, that Rousseau and fellow rookie class draftee, Carlos Basham, get to be the main guys. Overall he is a great player so hopefully, he can make the most of whatever snaps he gets and become a decent depth starter at defensive end.

I like the value here taking the mid-second round Saints’ pick. Werner is an extremely versatile player, with prototypical modern linebacker size, and is a very smart player. He might be lacking some of the pure athleticism that others in this class showcase, but he’s basically a better Zach Baun. It will be interesting to see how the Saints deploy both of these hybrid EDGE/off-ball linebackers. Baun only playing 80 or so snaps in 2020 is a big red flag, but he’s still a useful player for any team. In a pretty rough linebacker class from a depth perspective, Werner has a chance to compete for every down with Demario Davis.

I love this upside pick here in the middle of the fourth. Ossai has only been playing EDGE for a single year at Texas but walks into a great situation to continue to learn how to succeed. The Bengals clearly value his potential, selecting him at the top of the third round. There might be pass-rush specialist snaps for his first year but there is always a chance he figures it all out and is a major value. An every-down snap role is a bit crowded with Sam Hubbard and Trey Hendrickson but there’s a ton of potential with Ossai.

Adam Tzikas
Contributor at Dynasty League Football
Adam "StickyZ" Tzikas burns in the South Florida sun while he contemplates tweets no one will read. He is an avid nerd and hosts an IDP podcast with a bloke from the UK.