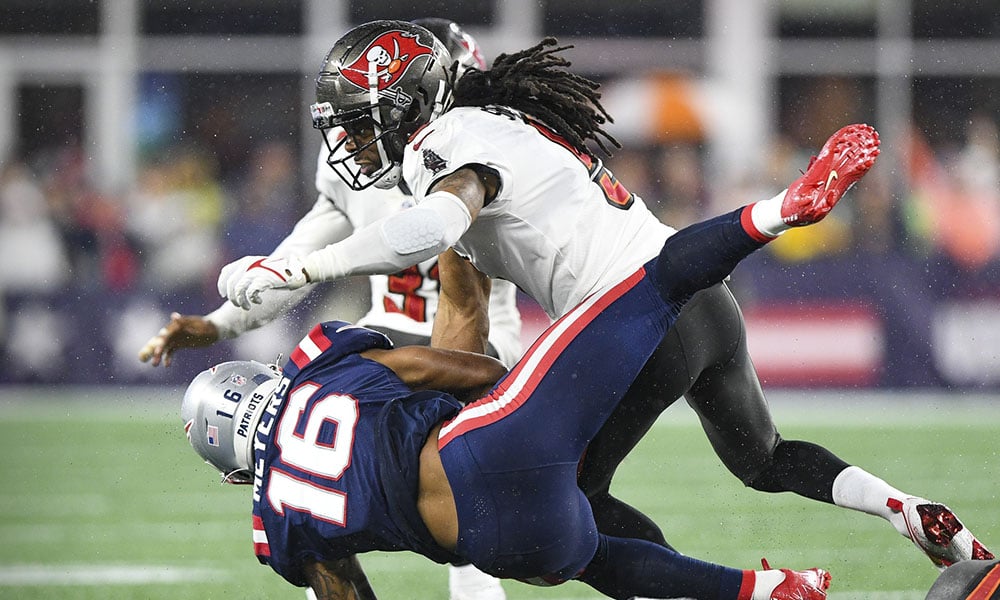 We offer up some of the top IDP pickup options on your waiver wires.

We’re through four weeks, and it’s the time of year when I pretty decidedly know which teams are contenders and which are pretenders. For my dynasty teams that are going nowhere, it’s time to dig deep into the free-agent pool and take some swings on rookies, sophomores and others who have a chance at greater opportunity next season.

For one, it’s nice to try to stay ahead of next off-season, when salary cap casualties can rocket a backup into a position of fantasy value. Secondly, in leagues that determine draft position for non-playoff teams by potential points, I want to line my roster with upside over players who have no fantasy value but are producing points this year (for instance, cornerbacks score well in some formats but individual corners simply don’t carry production year-over-year). If you can’t trade ‘em, dump ‘em, because they’re only hurting your cause.

Going forward, I’ll start working to identify some of those diamonds in the rough for consideration on your fantasy teams who aren’t quite ready for primetime.

Of course, I’ll still keep an eye on players who can help your contenders.

As always, keep in mind that when reading this article, not everyone listed is a target. I’m also writing up players you might be tempted to bid on, but shouldn’t. So just be aware that this is not just a list of guys to go pick up. And recognize that I’m writing for 12-team or larger leagues and for dynasty formats – some of these recommendations won’t make sense for ten-team or redraft leagues.

Brother Romeo’s misfortune – a suspected torn Achilles tendon – creates a path to relevance for Julian Okwara. He had a quiet rookie campaign and a slow start to the 2021 season; he managed two solo tackles (one for a loss) and an assist on a dozen snaps in week four. He’s still playing behind Charles Harris (three solos and an assist, two quarterback hits and a forced fumble on 52 snaps) and Austin Bryant (four solos – one in the backfield – on 43 snaps), so temper your expectations for now. Harris and Bryant are the immediate plays if you need edge help, while Okwara is the dynasty stash just in case he pops with his opportunities.

The 31-year-old Quinn had an off-year in 2020 and could still be available in some leagues. He’s certainly a short-term, startable option at edge where available. His two hits on the Lions’ Jared Goff included a strip sack, and he added five solo tackles for an Edge1 finish.

#Bears EDGE Robert Quinn has delivered a half-sack or more in every game, and 1+ sacks in 3 straight outings. #IDPHits

Gipson, meanwhile, erupted with a sack, a forced fumble, three solos (two in the backfield) and a pass defended. I wrote him off after an uninspiring rookie campaign, and the big week came against the Lions, but a big pre-season showed an improved player. I recommend adding him as a bench stash with future appeal.

Nice video here from @robertkschmitz on Trevis Gipson, who I totally wrote off after watching late last year but is coming off a great preseason. He's worth a stash in 14+ team leagues with deep benches based on his development. https://t.co/lmUBe1vrYQ

The rookie third-rounder should be scooped up if available in dynasty formats. With fellow rookie Micah Parsons mostly moving back to off-ball linebacker in week four, Golston saw 49 (70 percent) snaps after receiving 30 snaps in week three. He responded with half-a-sack, three solo tackles and two assists. Demarcus Lawrence’s injury and a general lack of quality depth for Dallas on the edge likely means that Golston is going to continue to receive significant work until he proves he can’t handle it.

The sophomore saw a season-high 44 snaps (56 percent) following Justin Hollins‘ move to injured reserve and responded with four solo tackles (one for loss that forced a fumble) and was credited a sack when he chased Kyler Murray out of bounds. He has Day Two draft capital and talent, but also a history of knee problems, so just know there’s a little more risk with Lewis than some other IDPs.

Did you have him rostered and drop him recently? It’s OK to admit if you did – Turay was an IDP turd prior to week four. He may turn back into a pumpkin once rookie Kwity Paye (inactive with a hamstring injury) returns, but Turay flashed some of that 2018 excitement with two sacks, two solo tackles and an assist on halftime work. Tyquan Lewis (two solos, one in the backfield) and Al-Quadin Muhammad (one assist) were the primary edge rushers but far less productive. I think he’s roster-worthy due to his upside – I probably always will – but I can understand if you just want to be done with Turay.

Make sure the third-rounder from UCLA is not available for the taking in defensive tackle-required leagues, because Odighizuwa looks like the penetrating, interior disruptor that Dallas has been seeking. He looked fantastic in week three’s Monday Night Football game, and followed it up in week four with a shared sack, three total quarterback hits, two solo tackles and an assist.

Don’t over-project future success based on the Vikings’ big week. Cleveland’s offensive line struggled in pass protection, and the Browns went with a run-heavy game script. That allowed the Vikings to stick with a heavy package that included a nose tackle. And with first-teamer Michael Pierce aggravating an elbow injury he suffered during practice late last week, Watts (44 of 78 snaps, four solos and three assists) received extra work and production.

Richardson, who has been abandoned in most leagues, also had a nice showing with four solos, an assist and two passes defensed. If anything, this bodes well for the defensive line for the Chargers – the Browns’ week five foe. Allocate your FAAB elsewhere.

I think it’s fair if you want to be concerned with what we’ve seen from Patrick Queen so far. Missed tackles aside (he struggled as a rookie with a 16.5 percent missed tackle rate, per Pro Football Reference), he can’t stack and shed blockers, and he’s still a total liability in coverage, so we haven’t seen improvement in those aspects of his game.

Board (five solos, two assists in 29 snaps) and Harrison (two solos – one in the backfield – and three assists in 32 snaps) have had solid roles so far, while Bynes came in to spell Queen on a series. I don’t know where this ends up, but we could see Queen’s dynasty stock sink like a lead zeppelin in short order. Harrison is a cheap and low-key dynasty buy if he’s not on the waiver wire, while Board and Bynes are stash considerations in the off-chance that Queen is benched.

Klein was useful last year in place of an injured Matt Milano. It looks like we’re in line for a repeat – at least in the short-term – after Milano left week four’s game with a hamstring injury. There are no reports on the severity of the injury at the time of this writing, but if Milano ends up missing games, Klein is worth an add. In limited action (23 snaps) he had a solo tackle, a fumble recovery and a pass defended.

I’ve been telling myself I’m not going to mention Ogletree in this space. He’s certainly rostered in more leagues than not, but he won’t be after week four’s line of ten solo tackles (one in the backfield), two assists and a pass defended. Keep in mind that he’s not a full-time player – he’s getting less than 80 percent of the defensive work in his highest snap weeks. He’s also terrible in coverage and has zero dynasty value, but he’s fantasy viable if you’re in a pinch. Sigh.

The primary fill-in for the injured Juston Burris, Chandler led the Panthers in total tackles (three solos, five assists). He wasn’t a full-time snap guy (48 of 61 snaps), and Burris should return in a few weeks, so consider him a short-term desperation play only. Chandler has a history with Carolina Coach Matt Rhule, and was a key defensive back on Rhule’s final two Temple teams.

The Bills have always liked Johnson, but he’s never gotten an opportunity behind Jordan Poyer and Micah Hyde. With Poyer missing week four with an ankle injury, Johnson showed that he’s capable with an interception and a couple of solo tackles. I don’t know if Johnson is the long-term answer once the 30-year-old Poyer’s play begins to drop off, and Poyer isn’t yet decrepit, so I wouldn’t rush out to add Johnson yet. But he’s worth keeping an eye on for dynasty purposes since Buffalo hasn’t been rotating safeties.

Woods has been a full-time safety next to Harrison Smith, and has actually been fantasy relevant. Week four (four solos, six assists) was his best outing yet. He’s another IDP to file in the “you could do a lot worse” category. You could, of course, do a lot better as well.

Pete Carroll was serious about shaking things up at cornerback. Tre Flowers was benched in favor of Jones – acquired from Philadelphia in a trade just before the start of the season – who tallied five solos, two assists and a pass defensed on 76 snaps. He wasn’t great (he was in the wrong coverage on Deebo Samuel’s wide-open touchdown) but he was probably better than Flowers. Any corner who is “not great” and playing full-time snaps is good-to-go for fantasy, so I’m endorsing him for week five vs. the Rams.

The 33-year-old was thrown at often in his 2021 debut and finished with seven solo tackles and a fumble recovery. Injuries to Carlton Davis, Jamel Dean (inactive with a knee injury) and Sean Murphy-Bunting (on injured reserve with an elbow injury) mean that Sherman Will continue to see a lot of work. The Dolphins are on deck in week five.

Jason King
Contributor at Dynasty League Football
Jason is a lifelong Steelers fan and proud alumnus of NC State University. He caught the fantasy football bug in 1996, and has a strange but strong affinity for IDP dynasty leagues with multiple copies of players. When he's not thinking about fantasy football, he's doing something with his two children, dabbling with photography or fixing something around the house.
Latest posts by Jason King (see all)
Dynasty IDP Waiver Wire: Week Four

I thought David Long was the Tennessee LB??