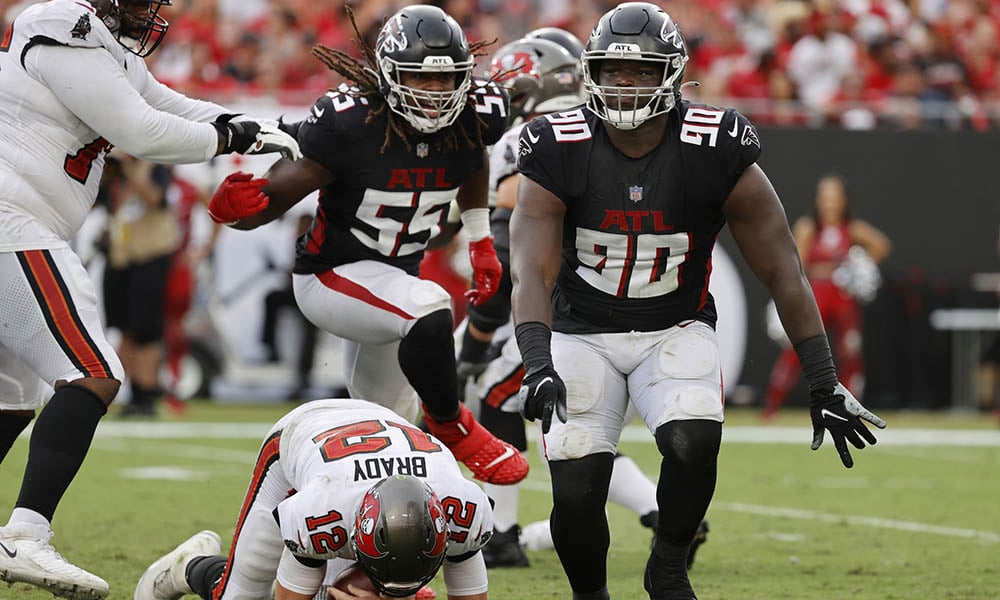 A look at the free agent landscape in dynasty leagues with 12 or more teams and more than 50 roster spots will leave you feeling depressed. I wish I could be a ray of sunshine after week two, but it’s a desolate horizon for those looking for lineup help.

Keep that in mind when reading through this article. Try not to just look at the names – not all of the options listed are targets. I’m also writing up players who you might be tempted to bid on, but shouldn’t. So just be aware that this is not just a list of guys to go pick up.

When possible though, now and moving forward, I’ll try to provide you with some IDP options for today – and tomorrow. This is DLF, after all, and we focus on dynasty above all other formats. We won’t ignore your immediate roster needs either, so I’ll also comb over short-term assets that could be available in your leagues.

It goes without saying, but with leagues coming in all different shapes and sizes, not all of the players covered will be worth adding in your league, and for sure many will already be rostered in larger leagues or even 10- or 12-team formats with deep benches and/or taxi squads.

Losing Brandon Graham to a ruptured Achilles tendon was a big blow to Philadelphia’s defensive line. Derek Barnett and Josh Sweat are going to be the primary edge rushers in the Eagles’ rotation, but Kerrigan could see some new life. I’m not sure what he really has left to contribute though.

The guy to keep an eye on from a dynasty perspective is Williams, who is classified as a defensive tackle in My Fantasy League. He somewhat surprisingly lined up at edge in the pre-season but looked good doing so. In most dynasty formats he’s probably rostered, but scoop him up and stash him if he’s available. He hasn’t produced yet (three total tackles in two games), but he’s only going to see his role grow moving forward. Even when measured against all defensive linemen, Williams shows up as an elite athlete with body-type limitations (his average height and T-Rex arms are the biggest concern):

You’re not going to get a big number of snaps with Robinson, who is squarely in Seattle’s big rotation at edge, but if you’re desperate at edge and looking for big-play upside, Robinson brings it. His second-quarter sack of Ryan Tannehill forced a fumble in week two. If he ever finds his way to more and more consistent snaps, we could be looking at a fantasy Edge2 or Edge3. Such heights are highly unlikely while he’s with Pete Carroll in Seattle however.

If you have a bench spot to burn and Sample is on waivers, he’s a decent speculative add in case of injury to either Sam Hubbard or Trey Hendrickson – both of whom are locked in long-term as Cincinnati’s primary edge rushers. Sample, an early Day Three pick from Tulane, had a somewhat productive week two with three solo tackles and one assist, with one tackle-for-loss. Even though he’s operating as the Bengals’ third option on the edge, fantasy relevance still seems remote, so he’s just a stash-and-hope. It’s also his 22nd birthday, so happy birthday, big guy!

The 2020 second-round pick never got it going as a rookie, possibly due to a pre-season knee injury and a COVID-19 break, and has been left for dead in many leagues. If there’s one thing Atlanta has going for it along the defensive line, it’s opportunity, and Davidson is going to continue to get the chance to show he can be the “1B” option to Grady Jarrett. He picked up a sack and a couple of tackles in week two. He’s a good add in larger leagues where you have the bench space available to sit on him for a bit.

Joseph-Day made up for a quiet week one with a sack, two quarterback hits, six solo tackles and three assists in week two. After an off-season in which he reportedly focused on honing his pass rush repertoire, it was good to see some fairly immediate dividends. He’ll be a hot commodity on the waiver wire this week if he’s available, so be prepared to pay up to secure him.

The fantasy production isn’t there yet (two solos, one tackle for loss in week two), but it’s eventually coming. He would have had another stop in the backfield this week if not for a bogus penalty call. The sophomore could be available in smaller leagues, and he’s worth rostering (not starting) in tackle-required formats if that’s the case. The Ravens are very high on Madubuike’s potential.

Coach David Culley said that Zach Cunningham was held out of the first quarter for disciplinary reasons, and the 2020 tackle leader reportedly has had recurring personal issues that have led to absences and tardiness this year. That all led to a big week for Grugier-Hill, who emerged from a quagmire of a linebacker room to start alongside Christian Kirksey and post six solo tackles, three assists, a sack, three tackles-for-loss, a quarterback hit and a forced fumble.

Grugier-Hill has always been a decent coverage linebacker, and it’s possible that his big week puts him in line for consistent snaps moving forward. If Cunningham is causing problems, Houston could look to move him, although his massive contract will be an albatross over any potential deal. If not Cunningham’s spot, we know Kirksey has a long and illustrious injury history, and it’s just a matter of time before his snaps are open for the taking. I’d certainly target Grugier-Hill on the wire this week.

With Jayon Brown out with a hamstring injury, Long stepped in and played all but one snap in Tennessee’s win over Seattle. He only put up six total tackles, and he’s listed here as a long-term play. As mentioned previously, both Brown and Rashaan Evans are free agents after this season, and Long could have an opportunity in 2022 to be a full-time linebacker. For that reason, he’s worth rostering now in dynasty, and in the meantime you can plug him in as a low-end starter when Brown is ailing.

I’m having a hard time getting behind him even after a six-solo, six-assist week two – probably because he’s not a full-time player (his 42 snaps led Raider linebackers, but it’s still just 75 percent of the total defensive snaps). Given the other options here (Corey Littleton, KJ Wright) he’s worth rostering for possible bye-week starts in deeper formats. I still believe Nicholas Morrow is the linebacker to own once he returns from injured reserve.

There’s no doubt he had a nice week with four solos, four assists, one tackle-for-loss, one interception and a pass defended on 58 snaps (95 percent). With Anthony Walker now on injured reserve and Jeremiah Owusu-Koramoah apparently not quite ready for a steady role, Smith looks like the best fantasy option among Cleveland linebackers. He’s worth rostering (and likely starting, depending on your league size and lineup requirements) for the time being.

Strnad saw 23 snaps in week two, posting three solos and two assists after Josey Jewell went out with a shoulder injury. Add Strnad, particularly in dynasty, if he was dropped after a quiet week one. Neither Jewell or A.J. Johnson can cover worth a lick, and both are free agents in the coming off-season. Denver likes Strnad quite a bit, and full-time snaps could be in the cards in 2022. If Jewell misses time, Strnad could help in the immediate as well.

Sorry to be a Debbie Downer, but I don’t think you’re going to find much help at safety on the waiver wire in the majority of dynasty formats. You’re better off exploring the trade market, and there are going to be good options that won’t cost you an arm and a leg. Just note that I’m more or less talking you out of most of the options listed below, rather than making a case for them.

Adderley posted a stat line that will draw you in (eight solo tackles, one assist, one pass defended), but it’s not sustainable despite a full-time role. He’s a deep safety, and the tackle production was more of a result of circumstance. Derwin James received more work out of the slot than usual due to an injury to Chris Harris, and Kenneth Murray missed 13 snaps with an ankle injury.

Chargers played quite a bit of dime today with Derwin as the primary slot corner.

Wingard will pop on your available free agent listing this week after eight total tackles and a sack, but I really wouldn’t bother. I know he has his fans out there, but he’s still not a full-time player and the Jaguars are grooming the rookie Cisco to be the safety complement to Rayshawn Jenkins. I think Cisco has a chance as a long-term play, but he’s still borderline rosterable.

You could give Diggs a look as he’s been productive as a tackler in both weeks; his 19 total tackles are tied with Taylor Rapp for tops among safeties. Just keep in mind the run-heavy game script in week two, with Seattle going against the Titans. Diggs looked bad trying to bring down Derrick Henry on touchdown runs, but no deep safety really stands much of a chance one-on-one in that situation. It’s just not a fair fight.

Don’t be fooled into wasting FAAB or a roster spot on Edwards. He had a game to remember with four solos, two late interceptions – both returned for touchdowns – and three passes defensed, but they came on just 39 (54 percent) snaps. Jordan Whitehead is still the primary box safety.

Kendall Fuller and William Jackson, WAS

Fuller is the Football Team’s primary slot option, and played all but two snaps in week two en route to a big week with seven solos, an assist, a sack and a pass defended. He’ll be busy once again in week three with Buffalo and Cole Beasley on deck. Jackson is also coming off a decent performance with three solos and two passes defended. Jackson should find himself on Stefon Diggs, one of the NFL’s leaders in targets. These two are hit-and-miss in terms of being rostered in cornerback-required leagues; I’d be sure to check on their availability.

I’m going back to Pittsburgh after plugging Cameron Sutton last week. Pierre (six solo tackles) is going to be targeted if Joe Haden again misses time with a groin injury. He’s among your fantasy league leaders through two weeks.

Jason King
Contributor at Dynasty League Football
Jason is a lifelong Steelers fan and proud alumnus of NC State University. He caught the fantasy football bug in 1996, and has a strange but strong affinity for IDP dynasty leagues with multiple copies of players. When he's not thinking about fantasy football, he's doing something with his two children, dabbling with photography or fixing something around the house.
Latest posts by Jason King (see all)
Dynasty IDP Waiver Wire: Week Two

You should be nominated for a Pulitzer for this article. Fantastic read!

Hey thanks! Amazon just pulled up and dropped something off on the front porch so that’s probably the Pulitzer. 🙂

Love these articles. If I can make a couple good ww pick ups each season, it puts me in great position to contend

Much appreciated – glad you find it useful.

I’m sure everyone saw the news (after I submitted this article) that Josey Jewell was placed on IR, so Strnad, if available, becomes a high priority add and worth a decent FAAB bid.