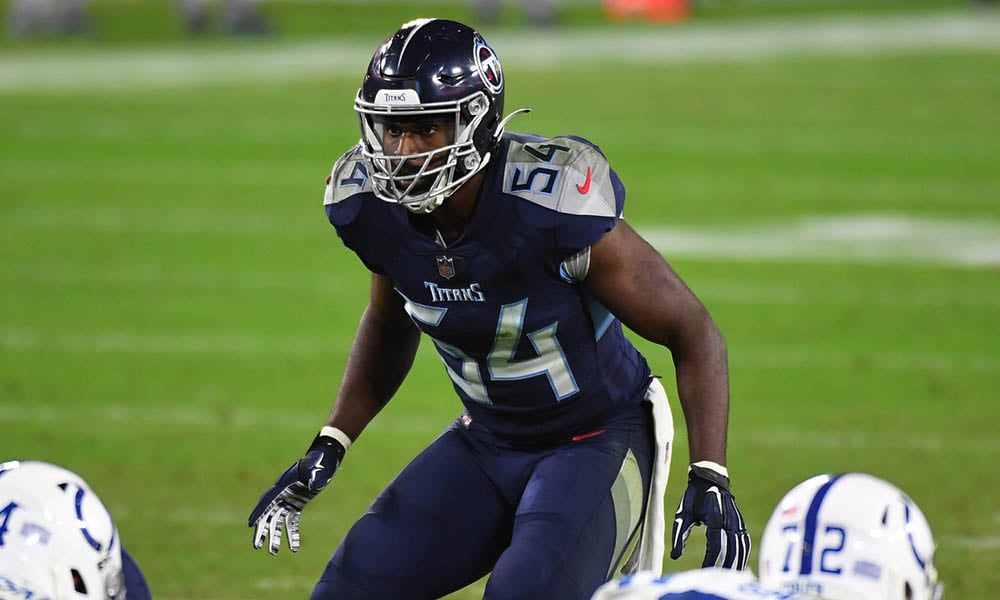 Who are the defensive players to target for the final stretch? We pick out some names.

Over the course of this season, my goal has been to provide one of two things: either finding guys that are either long-term dynasty stashes/investments OR quality one-week rentals. This week, however, I’m going to take a slight detour down another path. This week, my IDP waiver wire suggestions are recommended explicitly based on their matchups between weeks 13 and 14 combined, in case you are in need of a final starting piece or are looking for a flier option to try to get you past that #1 seed in the first round of the playoffs!

To uncover these players, I come up with suggestions going down two main avenues- The first measure will actually be a metric I invented, called Disruption Score (updated for the 2019-2020 season here). This metric specifically measures which players were most efficient at getting behind the line of scrimmage and affecting the quarterback’s normal motions, therefore “disrupting” the play. This metric has the most weight for DE/DT, but it can also show us which linebackers have multi-sack upside throughout the season if you are in big-play scoring formats. Before you dig into this column, here are a few of the usual IDP starters who have tough matchups ahead in week 13 who you MAY consider benching for a dart throw found below:

Good luck this week! I want to wish you the absolute best of luck heading into what is likely your final regular-season matchup. Football has been an incredible escape from the trials plaguing our country over the past three months, and it will be greatly missed when the season ends in the blink of an eye. As always, here are the top 25 defenders in terms of Disruption Score entering week 12 (minimum 20 tackles). Household name Trey Hendrickson (…kidding) surpassed TJ Watt after another great game last week, and despite the great production across the board in this picture, this list has a few names of some IDP candidates that may still be on your waiver wire. If you are thinking to yourself, “my defensive lineman has been playing well lately, but is it sustainable?” look no further than this metric. If you thought to yourself “Joey Bosa is third on this list, but he hasn’t done hardly anything by his standards…when will he get back on track?” well, there’s your answer. If you read last week and plugged Nicholas Morrow into your lineup, *this* metric is what uncovered his breakout matchup!

Watch the situation around Trey Flowers’ impending return closely, but considering he has not yet been activated off IR (and therefore has not even shown up on the injury report as a limited participant) I think there is a good chance Griffen gets a full workload once again next week against the Bears. If you watched the Packers-Bears game for even five minutes last night, odds are you saw Mitchell Trubisky take a sack. Griffen has been a great midseason addition for this struggling team, and I expect him to come home with a sack barring a Flowers return to action.

Cameron Jordan is an all-pro defensive end. Trey Hendrickson leads the league in sacks. The Saints traded a plethora of draft picks to acquire Marcus Davenport in the first round just two years ago. Yet among all those guys, Onyemata is one of the players making a big name for himself along that line in 2020, as he is ninth overall in Disruption Score this season. You really couldn’t expect much out of him if you played him against the QB-less Broncos yesterday, but if you are in a DT-featured league and are in need of someone to provide some serious upside, Onyemata is your guy. He racked up 13 tackles and three sacks in the month of November, proving he is hitting his stride when you need him most. Plug him in your DT spot should you find yourself in need, but he isn’t worth putting into a DE/EDGE roster spot considering the competition for sacks on his own team.

With Micah Kiser on IR for the next two matchups at least, Troy Reeder is a top-eight LB option. In his two games filling in for Kiser thus far, Reeder has amassed an incredible 26 tackles and three sacks! That kind of production was better than what Kiser was doing in his place, but it’s due to his perfect mixture of athletic ability and the result of opposing offenses exploiting him as a weakness. If your league mates were caught sleeping in a food coma this week, be sure to pounce and grab Reeder ASAP Wednesday morning. He could very well be the reason you win your league.

Indianapolis has been able to generate a meaningful pass rush unit, and few opponents are easier to attack in the trenches than Houston right now. Deshaun Watson has been sacked 30 times this season, and even in their drubbing of the Lions, Detroit was able to come away with two sacks of their own. Autry has proven to have a nice tackle floor as a failsafe (should DeForest Buckner steal most of the sack opportunities upon his return), and was on a nice sack streak before falling victim to the COVID-19/Reserve list. I don’t mind taking a flier on him for the next few weeks against the likes of Tytus Howard and Sam Young.

If Tuitt is somehow still on your IDP waiver wire, that should end now. I’ll pretend like my heart isn’t hurting when you ignored me four weeks ago, and we can ride on Tuitt’s back into the sunset (provided he get some sack luck) in the first round of the playoffs.

I’m doubling down on this take from last week! It’s been hard to rely on any Browns linebacker to be a solid starter this year; however, this week may be the rare exception to actually start one with confidence. Tennessee and Baltimore rank 11th and sixth, respectively, in terms of points surrendered to opposing linebackers. Goodson has been the lone usable linebacker up to this point on that team, but considering the upcoming matchups and the Browns’ relentless push toward a playoff berth, I’d say he is nearly a lock for double-digit tackles in these games, with the possibility of an interception on top of that. Roll Goodson out if you’ve been stashing him and watch the points roll in.

I am a bit cautious about this recommendation after his letdown against the Colts, but that was admittedly a tough matchup for Evans. Things look much brighter for him heading into matchups against two extremely run-heavy teams, with virtually no viable competition to steal tackles away from him with Jayon Brown out. I’d start him as a high-end LB3/low-end LB2, but a low likelihood of coming away with a splash play.

Defensive back waiver matchups are tough to find this time of year, and when you find yourself looking for a home run play, you have to be looking for a game with serious pick-six potential. Kirkpatrick is someone who could have that lottery ticket-type spark, but also has a great tackle floor to fall back on in case the splash play doesn’t come through regardless. He has 23 tackles over the past four weeks, but has also come away with three interceptions in his past five games. Jared Goff and *checks notes* Colt McCoy seem like prime pick-six candidates this point in the season, and the Cardinals are needing to play their absolute best football right away. Start Kirkpatrick and just pray Goff and McCoy give you that classic “C’mon man!” plays they’ve been known to give up.

Follow me
Ryan Miller
Ryan is a lifelong Steelers fan and recent graduate of NC State University. While his years are limited in life experience, he is a seasoned veteran of fantasy football, commissioning his first league at the age of nine. As a writer with years of industry experience in Advanced Analytics, he gladly welcomes the hottest of takes from readers as long as the numbers are there to back it up. You can find him at @RyanMillerNFL on Twitter for rankings debates and tons of helpful charts
Follow me
Latest posts by Ryan Miller (see all)
IDP Waiver Wire: Week 13

Willis is the starting SS and going no-where. Julian Blackmon is the FS to compete with Hooker right?

Not sure how Ryan feels about it, but Hooker is a UFA and I don’t see him back considering Blackmon’s emergence at FS. Willis is fine at SS and is a high-character guy that they love. It’s Willis and Blackmon, on rookie contracts, manning the safety spots for the next couple of years.

Yep, you’re right! Got it accidentally mixed up 🙂 great catch by Dawgs and Brian

With the 2021 cap coming down, I don’t see how they would sign an FA like Hooker to replace fully capable safeties like Willis and Blackmon on rookie contracts. Any free money would be better served spent elsewhere.

My bad, got the FS and SS positions mixed up when reviewing Ourlads’ site. Glad everyone reading these articles are such a sharp group!