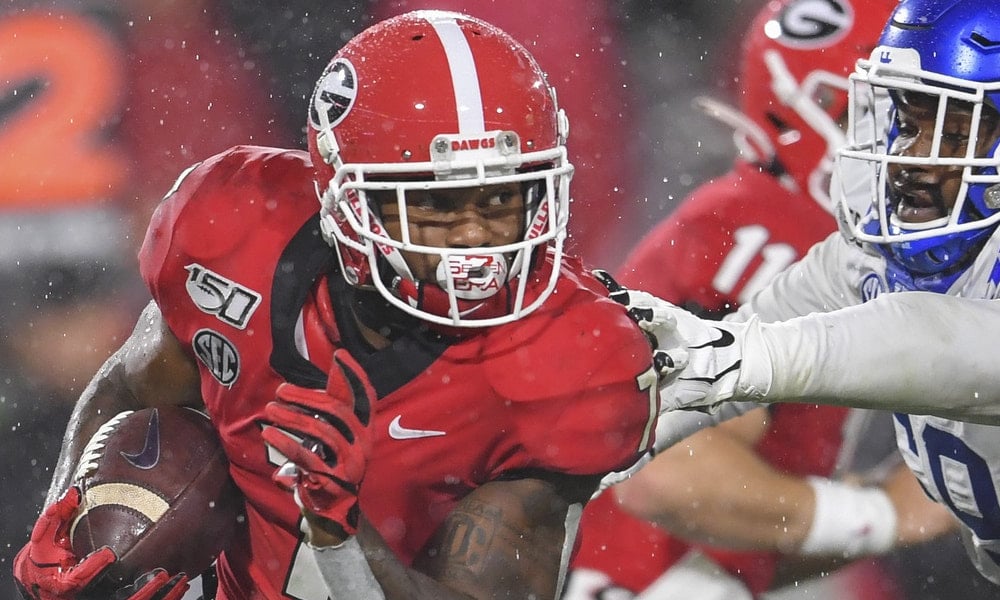 The top five Devy prospects in all the land, these ballers are sure to make a splash in the NFL and on dynasty rosters.

D'Andre Swift
Share
Tweet
Share
Share
Email
Comments
As dynasty owners putter about the interwebs discussing short shuttle times and dissecting the nuances of the Dominator Rating, Devy owners are intently watching Spring Practices and eyeing key positional battles. They say dynasty football never sleeps, but devy football never even rests. From Signing Day (both of them) to fall camp, devy calendars are chock-full of important dates. The Devy 100 is a breakdown of some of the best collegiate talent around. Players will be missed; others will emerge. My rankings will be cursed from Juneau, Alaska to Key West, Florida. Yet hopefully it provides a modicum of assistance to those navigating the murky waters of deep leagues, struggling to identify their tenth-round selection as they decide between Auburn’s third-string running back and an incoming freshman receiver at Ohio State. Without any further inane ramblings, on to the list.

The Skinny: Already a College Football Playoff legend, Ross was one of Clemson’s duo of super freshman who helped the Tigers obliterate the competition during the national semi-finals and finals. He looks like he was built in a wide receiver lab. His frame is ready-made for the NFL, and he’ll surely appeal to fantasy owners who prefer that their receivers tower over the competition. Ross’ sure hands and play strength endeared him to Trevor Lawrence, and he has enough speed to take full advantage of his unique physical gifts. A big receiver with elite early production, he has already cemented himself as a devy darling despite not being eligible until 2021. 2019 Outlook: Ross has been remarkably consistent in 2019, typically racking up stats prior to hitting the bench as Clemson blows out its latest overmatched ACC opponent. The true breakout is expected in 2020, when Clemson will still be deep at wide receiver but without target hog Tee Higgins.

The Skinny: You’ve likely seen the highlights. Jeudy is one of the more GIFable players in college football, operating like an NFL Blitz player in the open field with crazy agility and creativity. His movement skills allow him to embarrass corners in the intermediate game and blow past them in the open field. His explosiveness helps him profile as a true number one receiver at the next level, a big play waiting to happen virtually every snap. He will have to tack on some good weight, but his lithe frame is hardly an impediment to stardom. Jeudy has a refined enough game to be a team’s alpha receiver in his rookie season.