We round up last week’s top fantasy scorers and the overall leaders this season.

Patrick Mahomes and Jared Goff put on a show on Monday Night Football and are now the top two scoring fantasy quarterbacks on the year as well as the week. Even without receiver A.J. Green, Bengals quarterback Andy Dalton makes an appearance in the top 12 fantasy scorers.

Falcons quarterback Matt Ryan falls from QB2 to QB4 after his disappointing game against the Cowboys. Deshaun Watson and Tom Brady fell out of the QB1 range, replaced by Kirk Cousins and Russell Wilson, who now has four QB1 games in a row.

The Tampa Bay Buccaneers remain the top team to target when thinking about quarterbacks, making Nick Mullens an interesting option. We’ve already seen him tear up the Raiders poor defense. While this may still be a bit of questionable call, we all have to feel great about starting veteran quarterback Drew Brees at home against the Falcons on Thanksgiving night.

Houston, Miami and Seattle have been the toughest against the quarterback position, allowing two QB1 games each all season. In Week Twelve, the Texans host the Titans on Monday Night Football and there is still some uncertainty about which quarterback will even start for Tennessee. Regardless, this seems like a situation to avoid. Miami faces the Colts but Comeback Player of the Year lock Andrew Luck has proven to be matchup proof. Finally, the Seahawks travel across the country to face the Panthers and Cam Newton. In five career games against Seattle, Newton has only exceeded 200 passing yards once and he’s only thrown three touchdowns total. Even in a home game as the favorite, I have concerns about Cam in this one.

Packers running back Aaron Jones continued his recent breakout with an RB3 game while Ravens rookie Gus Edwards came out of nowhere to finish as the RB9. Scoop that guy off your waiver wires!

There are no surprises among the top eight backs as the cream is certainly rising to the top. Pass-catching specialist James White had his first game outside of the top 15 fantasy backs since Week Three, causing him to fall two spots. Bears sophomore back Tarik Cohen fell out of the RB1 ranks, while Broncos rookie Phillip Lindsay re-entered the group.

Not only is the quarterback Brees licking his lips about this Turkey Day matchup with the Falcons, running backs Alvin Kamara and Mark Ingram are as well. Atlanta has given up a league-high nine RB1 games and that number surely grows this week. They are especially susceptible to pass-catching backs.

The Chiefs and Dolphins are next on the list. Of course, Kansas City is on bye and the Dolphins face the Colts. Marlon Mack has slowed down slightly with RB36 and RB18 finishes after his RB2/RB3 explosion a month ago. This might be the game to get him back on track.

The Titans have only allowed one RB1 game all year, which is bad news for Houston back Lamar Miller, who has one RB1 finish this season himself.

Rookie receivers Tre’Quan Smith and DJ Moore enjoyed the best games of their short careers in Week Eleven, finishing as WR1s. Colts veteran TY Hilton showed he’s all the way back from the injury that cost him a chunk of the season, catching two touchdowns and a WR2 rank for the week.

Chiefs receivers Tyreek Hill’s huge game on Monday night was enough to boost him to the WR1 spot, though remember, he (and Rams receivers Robert Woods and Brandin Cooks) have played one more game than all other players in this top twelve. Broncos receiver Emmanuel Sanders fell from the top 12, while Vikings Stefon Diggs moved into the WR1 range.

The highest over/under of the week belongs to the Saints and Falcons. New Orleans has allowed nine WR1 games and Julio Jones might make it ten. We know the Buccaneers pass defense is subpar but do the 49ers have any receivers who can take advantage of the matchup? Marquise Goodwin was WR30 in Week Ten and is the best candidate. The Rams (bye) and Eagles (vs. Odell Beckham, Sterling Shepard) are the next teams fantasy owners should pick on as they build lineups.

The Texans have yet to allow a WR1 all season. Titans receiver Corey Davis has teased fantasy players with a pair of top-five fantasy finishes this season but in seven other games, he’s finished as the WR40 or worse. It was the Colts who shut down Davis last week and they’ve still given up just one WR1 game. The Dolphins have no one who should threaten their standing on this list.

With his season now over, Buccaneers second-year tight end OJ Howard can only fall down this list. Veterans Kyle Rudolph and Vance McDonald swapped places with the Steeler now in the TE1 range. Redskins veteran Jordan Reed played well with backup quarterback Colt McCoy and jumped from TE12 to TE9 for the year.

Three teams sit atop the list as friendly matchups for opposing tight ends. The Panther host the Seahawks but good luck picking between Ed Dickson and Nick Vannett. The Chiefs get some rest this week while the Bucs must be worried about what 49ers tight end George Kittle is about to do to them.

The Saints haven’t allowed a TE1 game yet, and even shut down Zach Ertz last week. This week, they’ll try to hold Falcons tight end Austin Hooper in check. The Jets (vs. Rob Gronkowski), Eagles (vs. Evan Engram) and Titans (vs Houston) have also been very good against opposing tight ends, allowing one TE1 game each all season. 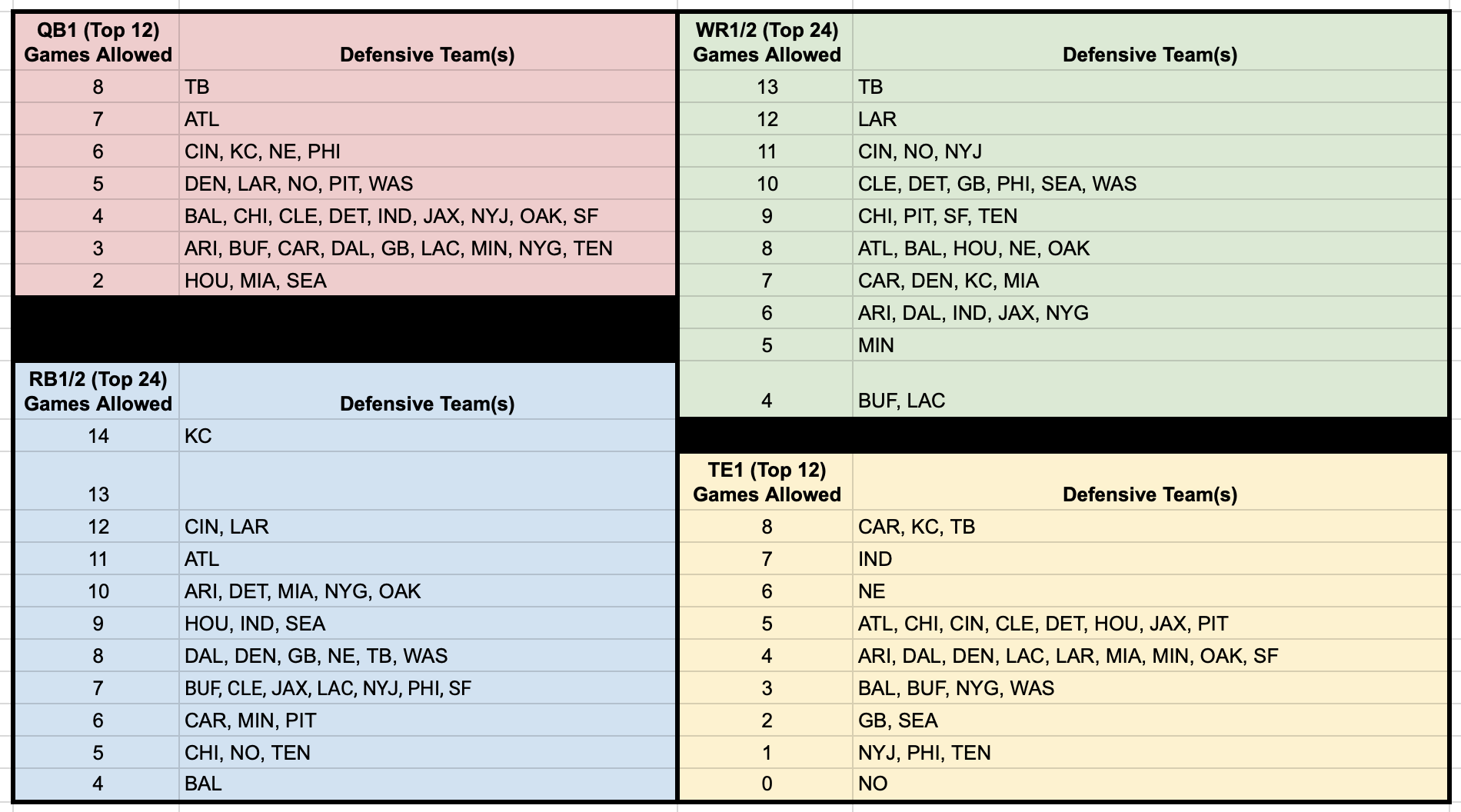