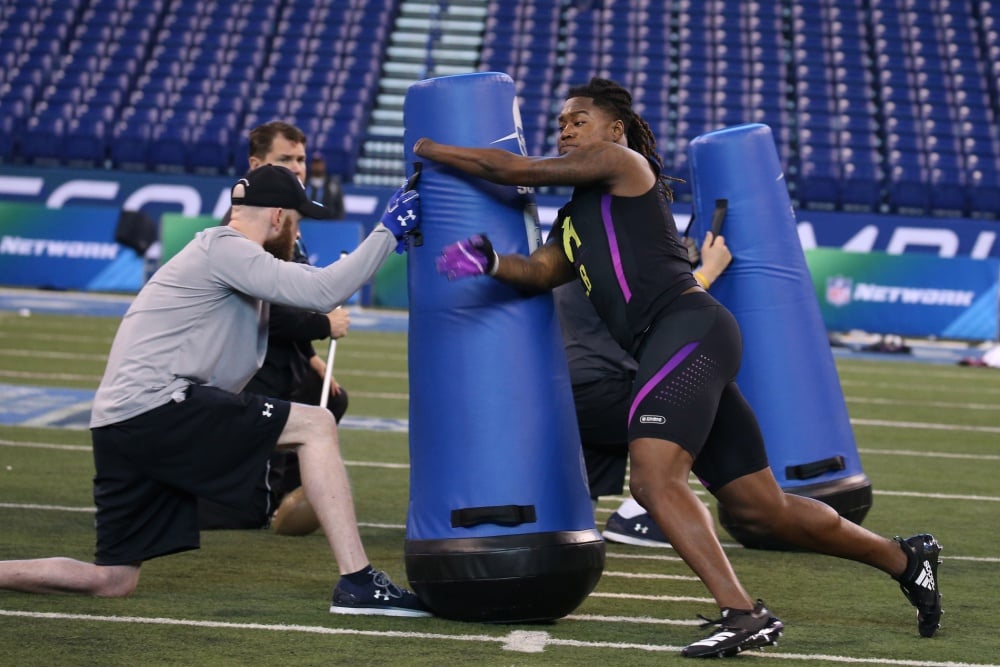 The NFL Combine is a great tool to help sort out the players in the upcoming NFL Draft. Measuring a player’s athletic ability can break tiers and split hairs.

Today I am going to concentrate on the defensive side of the football. This can be the first look at some of the IDP assets you need to have on your radar when draft time rolls around.

Shaquem Griffin, LB, UCF: If you didn’t know about Griffin before the weekend, you sure as heck did by Sunday night. Griffin had his left hand amputated as a child but that hasn’t affected him in the slightest. Griffin, who checks in a 6-foot-1 and 227 pounds, popped out 20 reps on the bench press. That made him the No. 1 trending topic on Twitter Saturday. But he still wasn’t done. On his first run of the 40-yard dash on Sunday, Griffin tore off a 4.38 time and that set Draft Twitter ablaze and made him the No. 1 trending topic, in the world. Griffin was suffering with some cramps when he was running his on-field drills, but still managed to look good. He won’t go in the first round, but you can expect ESPN and NFL Network to have multiple cameras on him when he does get drafted.

Rasheem Green, DT, USC: He showed a good physique and looked extremely sound in all the drills he was asked to perform on Sunday. Green ran a 4.73 40-yard dash, had a 32.5 inch vertical, and had a 118 inch broad jump.

Josh Sweat, DE, Florida State: First, let me preface this by saying I was not crazy about Sweat’s tape. I didn’t see anyone special when I watched him. However, he came out an destroyed the combine. Sweat ran a 4.53 40-yard dash. That was better than some of the wide receivers I had my eye on before the weekend. He also turned in a 10-foot, 4-inch broad jump, which is also very good. I am going to have to go back and rewatch his games to see what I’m missing.

Malik Jefferson, LB, Texas: We knew that Jefferson was a good athlete, but his tape has been so rough, he needed a good showing just to reclaim some buzz around his name. Jefferson ripped off a 4.52 40-yard dash and put up 27 reps on the bench press. He looked comfortable and fluid in all of his drills, which leads me to suspect that the Longhorns were misusing him and he could be a much better pro.

Derwin James, S, Florida State: Rarely does the top-ranked player improve his stock, but James managed to pull it off Monday. He ran a more-than-solid 4.48 second 40-yard dash and added on 21 reps on the bench press, tied for third-best. He looked smooth and natural in all the drills as was expected.

Josey Jewell, LB, Iowa: Most people are in one of two camps on Jewell. Either he’s a prototypical ILB who will gobble up tackles in the middle, or he’s cerebral player and a sub-par athlete. Unfortunately for Jewell his testing leans towards the second description. He ran a 4.82 40-yard dash and only had 18 reps on the bench press.

Azeem Victor, LB, Washington: Victor already had an up-and-down season on the field in 2017 and then did himself no favors at the combine. He ran 4.72 40-yard dash, only had 19 bench press reps and only a 32.5 vertical. Slow guys with bad attitudes generally have a hard time getting drafted.

Tim Settle, DT, Virginia Tech: Nobody expected Settle to light the combine, but he needed a better showing than he put out. He didn’t look “body beautiful” then compiled that issue with a 5.37 40-yard dash. He also only jumped 23.5 inches on the vertical and 96 on the broad jump. That might have been ok if he didn’t also look really bad in the drills, including falling a couple of times during the bag drills. He definitely cost himself.

Maurice Hurst, DT, Michigan: He was a player who everyone was excited to see test. However, Saturday night it was reported that Hurst was diagnosed with a heart condition. During Sunday’s broadcast Hurst said he was going to get more tests ran back at the University of Michigan, but was expecting to be ready to go at his Pro Day.

Vita Vea, DT, Washington: Vea only ran one 40-yard dash before he pulled up with a tight hamstring and couldn’t do anymore drills. That 40 was still 5.11 seconds at 347 pounds which is all kinds of crazy. DLF’s own Tom Kislingbury challenged his twitter followers to go outside and try to beat that time themselves. He also did put up 41 reps on the bench press.

Nothing on the freak LBs, Edmunds & Vander Esch? Or what about Taven Bryan?

And holy crap, were some of these DBs impressive yesterday – That white boy Apke broke the combine!

We already knew Edmunds was going to test well, so that’s why I left him off.

You’re right, I probably should have added a couple of more DBs.

That’s certainly fair about Edmunds, although I would argue that’s even more the case with Jefferson. That’s almost ALL he is, is a remarkable athlete.

Were you impressed by Landry? I’d say he really helped his case to get back into the First round.

Yes, I was. I think the biggest thing was he looked healthy and moved around well. I think he’s right back in the first round mix.

I took advantage of the FanDuel $10 deposit offer last week, but still cannot access/login to your site. My email address is [email protected]. Please advise.

I’ll pass that along to the Partners. They’ll get you all hooked up.

Simon, I’ll shoot you a direct email as well, but you were setup on 3/3 and should have received an automated email w/ login info at the address you outlined above.