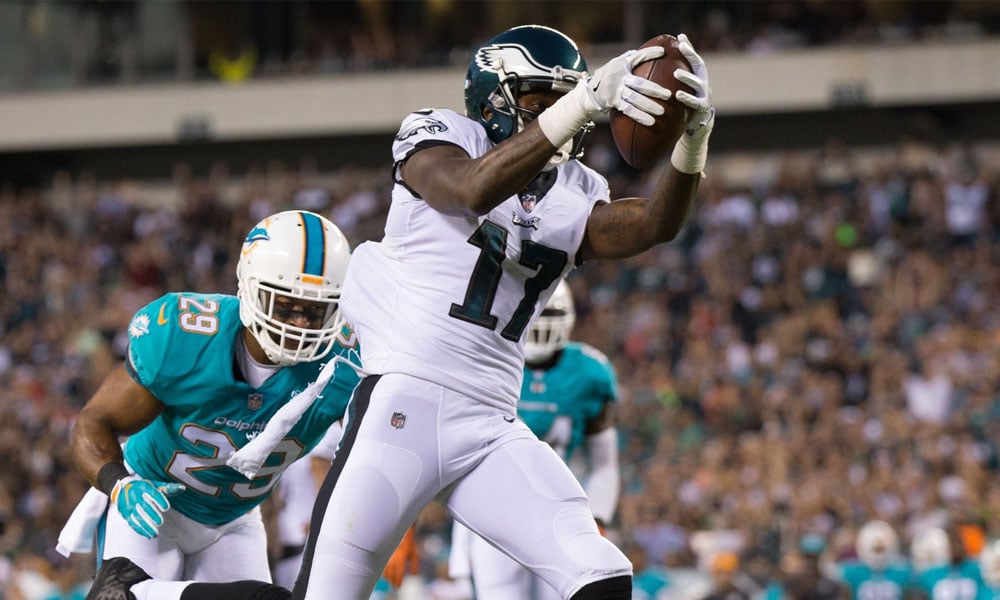 We take a look at Thursday’s action, including Alshon Jeffery’s first touchdown as an Eagle.

The third week is always the most critical in the preseason. After all, this is where we get to see the “dress rehearsal” from just about every team. In addition, all the speculation about some of the rookies and younger players actually getting meaningful playing time in the regular season comes to light a little more as we see if they’re mixed in with the starters this week. We’ll break this out into several parts this week so you can stay up-to-date with all the latest happenings and we start with Thursday’s games.

For the Eagles, it’s clear Carson Wentz is poised to make a leap in his second year. On the night, Wentz completed 6-of-10 passes for 129 yards with two touchdowns and one interception coming off a tipped pass. Outside of that blemish, Wentz looked solid and hooked up with each of his new receivers (Alshon Jeffery and Torrey Smith) on touchdowns.  Smith broke loose early for a 50-yard score and Jeffery caught a nice 15-yard pass for his first touchdown as an Eagle. In other Eagles news, Wendell Smallwood rushed for 28 yards on four carries, which isn’t anything extraordinarily special. However, the noteworthy part there is the fact he rotated in with the starters. It’s clear Smallwood is going to eat into LeGarrette Blount’s carries. It’s also clear Blount just doesn’t really fit the offense very well, so that’s going to be something to follow in the coming weeks. Corey Clement continued his strong case for a roster spot with 42 yards and a touchdown on nine carries. He also clearly played ahead of Donnel Pumphrey (12 carries for 37 yards), who could be in danger of not making the team. One player who will make the team is Mack Hollins, who posted five catches for 44 yards. Hollins is a sneaky stash with the depth chart ahead of him at the position promising to look different next season.

As for Miami, Jay Cutler is clearly going to take his chances and get his money’s worth after coming out of semi-retirement. Cutler finished the night going 5-for-8 for 105 yards and threw a short touchdown pass to Julius Thomas. He also snaked new Eagles cornerback Ronald Darby into a long pass interference call that set up another touchdown. The highlight of the night of was another case of Darby abuse as Cutler victimized him on a 72-yard completion to DeVante Parker, who high-pointed the ball over Darby and nearly took it to the house. The Dolphins offensive skill players looked to be in trouble when Ryan Tannehill went down, but Cutler is going to be aggressive and give his playmakers a chance – it’s a win for anyone who owns Parker, Jarvis Landry or Kenny Stills. Matt Moore was awful as he went 5-of-11 for 43 yards and threw two interceptions, proving to everyone the Dolphins were wise to go and grab Cutler. Jay Ajayi was also solid as he posted 53 yards and two touchdowns on just nine carries. There are always going to be concerns about Ajayi’s durability, but he looks poised for a big year as well.

The biggest news of the night was clearly the return of Cam Newton and it proved to be a quick one, at that. Newton went 2-for-2 for for 21 yards, including a 9-yard touchdown pass to Kelvin Benjamin before quickly exiting the game and surely being put on ice until the regular season. I’m still on record saying Benjamin is being undervalued in dynasty leagues right now. Christian McCaffrey had 21 yards on seven carries and 12 yards on one catch. It’s clear he’s going to be asked to rotate in with Jonathan Stewart (five carries for 39 yards) and play on passing downs. He has massive playmaking upside but Stewart is going to be a thorn in the side of his elite fantasy potential in the short-term. Still, he’ll be on the field early and often for the Panthers and this is going to be an exciting offense to watch. Curtis Samuel also played and caught four passes for 15 yards.

All eyes for the Jaguars were on the quarterbacks. Chad Henne started for Jacksonville and completed 8-of-14 passes for 73 yards. He did provide a 37-yard completion to Allen Robinson and had another long pass dropped, but Henne couldn’t do much overall. Meanwhile, Blake Bortles started the second half for the Jags and responded by going 12-of-16 for 125 yards with one touchdown and one interception. He looked quite a bit better than he had this preseason, albeit against backups as he started the second half after Chad Henne’s sub-par night was done. The intercepton he threw wasn’t totally his fault and likely should have been caught. He also threw an interception in the end zone on what could have been the game winning two-point conversion but he had no choice but to attempt to make a play in that situation. The Jags now have a choice to make. Henne is going to be more accurate and move the offense along quietly, while Bortles would promise to be more aggressive but likely generate many more turnovers. With Leonard Fournette to carry the offense and a defense that looks to be emerging, it seems like Henne would get the call and Jacksonville would accept their mistake in picking up the option on Bortles.

We’ll be back tomorrow with a look at the games between the Seahawks and Chiefs as well as the contest between the Patriots and Lions. Those should be very interesting games as we see how Eddie Lacy and Chris Carson fare for Seattle with the stage to themselves and see just what the Patriots might be thinking in terms of a running back rotation.