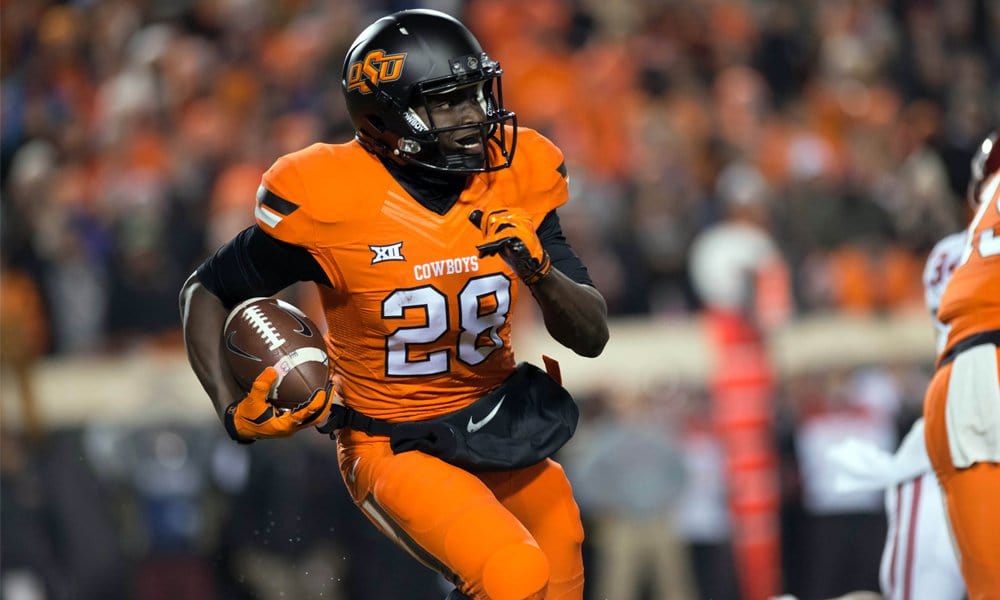 We offer up a slew of college players to watch this weekend.

In this series, we take a look at future NFL players with a focus on offensive skill positions to help those of you in developmental (devy) leagues. For those in regular dynasty formats, we’ll give you some of the key players to watch as you start the preparation for 2017 rookie drafts.

While the opening week gave us some pretty good matchups in terms of top teams playing each other, that’s not the case this week. Still, there will be a ton of future NFL talent on display. Here are the games and players to watch this weekend.

This game is all about the Cowboys, who boast a pair of highly-regarded NFL prospects in wideout James Washington and quarterback Mason Rudolph.

Four of our five devy rankers have Washington — who is 6-foot, 205 pounds — as a top-eight receiver in the 2017 draft-eligible class. He is a good athlete who plays physically and snags the ball with strong hands. As it stands now, he’ll probably come off the board in the second round of 2017 rookie drafts, although a lot can (and will) change over the next few months. Washington is really, really good, and the fact he can’t crack the top 12 players in the 2017 class is exactly why everyone is so hyped about this group.

Massively under-recruited out of high school, Rivals rated Washington as a three-star prospect. The Cowboys were the only “big” school to offer him, according to Rivals, and he immediately proved them right by catching 28 balls for 456 yards and six scores as a true freshman. As a sophomore, Washington really broke out, totaling 53 grabs for 1,087 yards and ten scores. He’s a proven playmaker and averaged a robust 20.5 yards per catch last season after averaging 16.3 yards per grab as a freshman.

Rudolph, a junior, makes Oklahoma State’s offense hum. Last season, in his first year as the starter, Rudolph completed 62.3 percent of his passes for 3,770 yards, 21 touchdowns and nine picks. We have him as the fifth-ranked quarterback for 2017, although, admittedly, I’m more bullish on him, slotting him third behind Deshaun Watson and Brad Kaaya. At 6-foot-5, 235 pounds with a big arm and good touch, Rudolph checks off a lot of boxes. For me, Watson is the top signal caller in the class by a wide margin, but after him, I’m intrigued by a couple passers, including Kaaya, Rudolph and DeShone Kizer.

Courtland Sutton alert! SMU doesn’t have too many games on national television, so cherish this opportunity to get your eyeballs on Sutton, a devy darling.

The SMU redshirt sophomore is listed as a top-five wideout for 2017 by four of our five rankers. After taking a medical redshirt his first year on campus, Sutton exploded last season, making 49 receptions for 862 yards and nine scores. Those stats may not seem great, but it’s worth noting SMU passed for just 19 scores last season, so Sutton nearly accounted for half of their receiving touchdowns.

In his first game this fall, Sutton lost his mind, hauling in four passes for 162 yards and three touchdowns as the Mustangs beat North Texas. While the American Conference isn’t too bad and Baylor isn’t known for their stout defense, this is still a chance to see Sutton go up against high-level Division I corners. Listed at 6-foot-4, 215 pounds, it’s worth carving out a couple hours of your Saturday to check out Sutton.

As an added bonus, Baylor brings some serious offensive talent to the table, as well.

Seth Russell, our No. 12 quarterback for 2017, leads the way for the Bears. Operating Baylor’s pass-happy offense, Russell had a monster season in 2016 prior to getting hurt. He completed 59.5% of his passes for 2,104 yards, 29 touchdowns and six interceptions. He was very efficient in Baylor’s season-opening beatdown of Northwestern State, going 14-of-20 through the air for 163 yards and four touchdowns.

K.D. Cannon, our eighth-ranked wideout for 2017, has had two very productive seasons for Baylor. As a true freshman, he went for 58 catches, 1,030 yards and eight touchdowns. He followed it up with 50 receptions for 868 yards and six touchdowns in 2015.

Shock Linwood rounds out the Baylor prospects who will be playing. A senior running back, he opted to come back to school after rushing for 1,329 yards and 10 touchdowns on 6.8 yards per carry in 2015. Linwood has averaged at least 6.8 yards per carry in two of his three seasons, and he’s carried the rock at least 128 times in all three of his campaigns. Overall, he’s rushed for 3,559 yards and 34 touchdowns on 6.1 yards per attempt. Despite Baylor’s propensity for throwing the pill and his immense playing time, Linwood has made just 20 catches in his career.

Receiver Ishmael Zamora, a sophomore, will miss his second straight game as part of a three-game suspension.

After narrowly avoiding a disastrous upset to Appalachian State in the season opener. Tennessee welcomes Virginia Tech to Neyland Stadium.

The Volunteers feature a plethora of 2017 draft-eligible players, led by Alvin Kamara and Jalen Hurd, two explosive running backs. Hurd was fed in Week One, totaling 110 yards and a score on 28 carries. Kamara was a distant second in touches, gaining 21 yards on six attempts. In our 2017 rankings, Hurd is the 10th-ranked back while Kamara checks in 22nd.

Quarterback Joshua Dobbs — our 11th-ranked signal caller in the 2017 class — turned in a clunker in the overtime win over Appalachian State, completing just 16-of-29 passes for 192 yards with one touchdown and one pick. Dobbs was a dual-threat weapon last year. He passed for 2,291 yards, 15 scores and five picks while rushing for 671 yards and 11 more touchdowns.

Dobbs’ lone score in the opener was a 67-yard hook up with wideout Josh Malone, our No. 15 receiver in the 2017 class.

Virginia Tech is led by receiver Isaiah Ford, who is our 14th-ranked wideout for 2017. A 6-foot-1, 190-pound junior, Ford has had two straight very good seasons for the Hokies. After going for 56 catches, 706 yards and six touchdowns as a true freshman, he amassed 75 receptions for 1,164 yards and 11 scores a year ago.

While he’s listed at 190 pounds, Ford doesn’t look it. Regardless, he is a little thinner than a prototypical top receiver in the NFL, but he obviously has time to add muscle. Ford may wind up profiling as more of a slot receiver, but I wouldn’t put him in that box just yet. He’s not great right now in contested-catch situations, but it’s not a huge need for him because the dude is always open. For my money, he could be the best route runner in this class, and he’s extremely difficult to tackle in the open field.

If he comes out after this year, he’ll likely be one of the first wideouts off the board. While we’re a little lower on him for devy purposes, CBS has him listed as the third-ranked receiver in the class, trailing only JuJu Smith-Schuster and Mike Williams. They’ll be plenty of time to debate draft rankings over the next several months, but Ford has a good chance to be a quality NFL wideout.

This is unbelievably detailed, thanks man.

Really appreciate the thought and time,, got my day scheduled now!

Thanks, Jason. It’s a lot sometimes — especially listing all the other games to watch aside from the three highlighted ones — but I enjoy putting it together! I’m glad you find it useful.

Great job as usual. Only request for those of us just learning guys to look at and watch out for, any chance can list position of players in games to watch besides the feature game at each time slot or even asterisk next to guy to watch? Thanks!

Thanks, Daniel. I really do appreciate it. If I am reading this correctly, I think you’re asking me to include positions for the players in the “other games to watch” sections. I think that’s a really good idea, and I’ll start doing that moving forward. Thanks for the suggestion.

Let me know if that didn’t answer your question!

That was great. Thanks Austin. Looking forward to my “homework” for this weekend. Thanks for all the work to put these lists together for us.

This chunk of games (below) is mistakenly included in the section of evening games to watch. It’s actually a handful of games from the opening weekend that I forgot to erase when putting together this week’s installment. Real talk: We took our little kid’s pacifier away this week, so sleep and I have briefly met. I will do 20 — er, maybe 10 — pushups and be better! Appreciate the understanding.