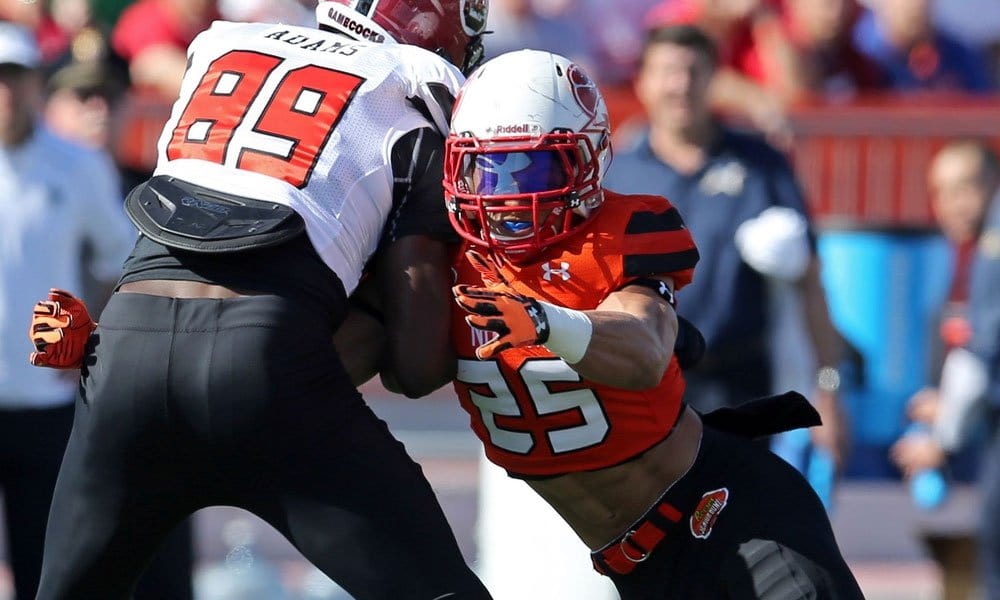 We continue to dive into the important rookie IDPs.

There’s still a lot of uncertainty with how many of these rookie IDPs will be utilized, but with some indications from beat writers and coaching staff post-draft comments, as well as some initial reports from early OTAs, here are my current rookie IDP rankings. Be sure to check out 1-20 posted recently as well.

Note: Rankings are based on IDP scoring with a sack-to-tackle ratio of 3:1 or less (i.e., tackle heavy formats). Because of that, rush linebackers and sack specialists will be ranked lower in this list as compared to big-play leagues due to their low ceiling and uncertain dependability on a weekly basis.

Take the target timing with a grain of salt as it’s highly dependent on the specific offensive / defensive scoring. These are to be used as a general guideline. I’ve assumed a 12-team league, with a cornerback and defensive tackle requirement and 3:1 sack-to-tackle scoring.

Both Rex Ryan and Doug Whaley stated Washington is a favorite to start as a rookie across from Kyle Williams. MFL currently has Washington listed as a tackle, but that will change over the summer in the next round of position updates as Marcell Dareus will play nose tackle with Williams and Washington outside. Washington possesses upside as a pass-rusher in subpackages making him an attractive IDP option.

A dominant in the box safety, Killebrew isn’t getting the attention he currently deserves. There is very little talent ahead of Killebrew on the depth chart and he’s a fantastic tackler. He’ll be given a realistic shot to be the Lions’ starter at strong safety to begin the 2016 season.

As an upside play, Collins is a raw player who could be a tremendous NFL and IDP option. Coaching will be key, but in deeper defensive tackle required leagues, his pass rushing ability makes him a prime long-term option. He should also see playing time immediately as a rookie in a variety of defensive packages with Tyrone Crawford the only fixture in the middle of the line and shallow depth across the front four with various teammate suspensions. Collins is a favorite late pick for me with the potential to become a long-term quality option.

Brothers is undersized and more football IQ than athleticism, which may limit his NFL potential. While there are questions about his athleticism, Brothers’ production and intangibles are undeniable. The perceived issue is his situation as he’s unlikely to be a three down linebacker with Eric Kendricks and Anthony Barr in mix. The depth chart will cap his upside, but he can still be effective in deeper leagues. Ultimately, he should be the Vikings middle linebacker and Kendricks should shift to the weakside with Chad Greenway aging and ineffective.

I expect Schobert to be a more meaningful IDP option than Scooby Wright. He played outside linebacker in Wisconsin’s 3-4 scheme, but he doesn’t have the size to stick there in the NFL. He may play some outside linebacker in certain packages, but he’s most likely to settle inside. That said, he started rookie camp on the outside and is expected to be move inside in OTAs and training camp. If he ends up playing on the outside, he’ll drop in these rankings substantially, but I don’t see that happening.

He reeks of Dion Jordan and is an outside linebacker in a 3-4, which means little value in my rankings. He’s a boom-bust prospect who’s too risky to go after early in a tackle-heavy league.

The Muhammad Wilkerson comparisons are plentiful. Both are very fluid in their movement, their ability to shed blockers and their builds. He’s an athletic high-effort prospect, but unfortunately, Butler enters a logjam. He’ll be a part of a rotation with Kawann Short and Star Lotulelei for the foreseeable future. Short is a free agent in 2017, but the loss of Josh Norman should give the Panthers enough room to re-sign him. With Lotulelei extended through 2017, 2018 may be Butler’s first shot at a starting role. While I love his talent, opportunity is king on the defensive side. In a better situation, he would be ranked above Collins.

Bullard is a good bet to start in the Bears’ base package as a rookie with the potential to slide inside in subpackages. Akiem Hicks is one defensive end starter who’s etched on the lineup card, but the five-technique spot is undetermined and to be settled with an open camp competition. Defensive coordinator Vic Fangio already said he expects Bullard to contribute early and considering his motor and quickness, it wouldn’t be surprising for it to be week one.

A natural pass rusher, Dodd would have had more IDP value in a 4-3 defense as a defensive end. His sack ceiling is high, but he played with his hand in the dirt most of his collegiate career. He did spend some time in a two-point stance at times and showed well at the Combine, but there are questions about his long-term fit in the role.

With Randy Gregory and Demarcus Lawrence suspended early in the year, Tapper will be thrown into the mix immediately. The potential is there, but he needs to improve his technique and polish his game to demand snaps. Otherwise, he’ll be a situational player long-term.

Mario Edwards is coming back from a career threatening injury. Current indications suggest he’ll play, but otherwise, the Raiders’ have an unsettled depth chart. Most tab Ward as a raw prospect, which will require patience for IDP purposes and leave him on the wire in all but deeper leagues, but the Raiders’ early second round selection shows the potential they believe he possesses. The raw skillset, as well as questions about his toughness to play on the interior line make Ward a boom-bust option.

Bell should initially see snaps as the third safety in passing situations, but ultimately, he appears to be Jairus Byrd’s replacement. Byrd was signed to a massive contract in 2014, but there are rumblings the Saints will either restructure his contract or release him. If released, Bell has a clear path to snaps, but otherwise, he’ll be a subpackage player in the near term. Bell’s a better coverage safety than a tackler, which is likely to cap his production.

Lawson is likely to struggle in coverage out of a two-point stance. He’s capable against the run and, while not a speed rusher, he can get to the quarterback with a combination of explosiveness and power. His unexpected injury set back coupled with his role as an outside linebacker push him well down in my tackle-heavy rankings. There is very little upside in a 3-4 scheme. Lawson is another edge rusher who would have been a better fit as a defensive end in a 4-3 scheme. This selection of Lawson is reminiscent of Rex Ryan’s Quinton Coples move in New York a few years back.

Ogbah is yet another 3-4 outside linebacker who’s less appealing in tackle-heavy leagues with a very low IDP ceiling.

Robinson should replace Caraun Reid as a starting defensive tackle early in 2016. Reid’s better suited for a reserve role. Robinson, on the other hand, bolsters the Lions’ run defense immediately. The key to his IDP value will be if he can become a mainstay in passing situations. If he can, he has the potential to be a top tackle option. If not, he’ll be used as a match-up play and be found on the wire frequently.

Brown wasn’t invited to the Combine and is in a tough spot with Perryman, Te’o and Perry ahead of him on the depth chart. However, he’s a player with significant upside. With the NFL’s shift to undersized athletic linebackers, he’s an ideal stash.

He’ll need some time to develop and will initially be a part of a defensive end rotation, but Jones’ ability to get to the quarterback may be the trait to bring him to fantasy relevance.

There is a lot of uncertainty atop the Texans safety depth chart. Dillon will be in the mix immediately. This is purely an opportunity ranking as he leaves a bit to be desired from a prospect perspective.

Cash will be a linebacker in the mold of Deone Buccannon. Unfortunately, he was drafted into one of the better linebacking groups in the league which will cap his snap opportunities in the short-term. If stashing talent on the IDP side is your thing, Cash is an ideal addition.

He’s a project, but has prototypical size, is athletic and can play any linebacker spot in a 4-3 defense.

Shilique Calhoun, OLB OAK – There is uncertainty, but I believe with the signing of Irvin, the Raiders stick to a 3-4 and he’ll play OLB. If the Raiders transition to a 4-3 and Calhoun plays defensive end, he will jump considerably in the rankings.

Scooby Wright, ILB CLE – He’s horribly unathletic, especially after the college injury. If he gets an opportunity, I don’t believe it will be long-term role as athleticism is essential in today’s game.

Darian Thompson, FS NYG – He may be a fine NFL player, but his struggles in the tackle department make him a less than ideal IDP option. Others like him quite a bit more than I do.

Cornerbacks – I’d rather play the wire for annual breakouts or on a matchup basis than ‘waste’ a pick on a cornerback. In corner premium leagues, my view would change, but in standard leagues, corners aren’t atop my list, even in corner-required leagues.

Day 2 / early Day 3 3-4 OLBs – I prefer to take a shot on a long-term every down linebacker at a high tackle volume role, as opposed to a highly volatile and unpredictable 3-4 OLB. Low ceiling guys with volatility aren’t typically my thing in rookie drafts.